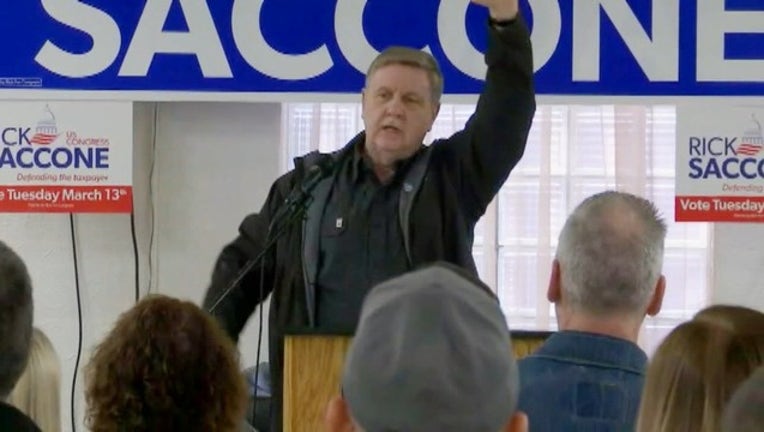 TRAFFORD, Pa. (AP) - Barbara DeFelice spent a bright but chilly afternoon preparing her garden for spring, not hand-wringing over a congressional special election two days away. She decided months ago to back Republican Rick Saccone for one reason: opposition to abortion rights.

"He shares my values," the 64-year-old retiree said Sunday. "I just don't understand that people say we shouldn't put lobsters into hot, boiling water ... but we can kill babies."

Nearby in this upper-middle-class enclave outside Pittsburgh, engineer Carol Heinecke, 57, offered another absolute reason for supporting Saccone: President Donald Trump. "Rick's going to support everything he's doing," she said.

Such attitudes will be the difference should Saccone emerge victorious Tuesday in his surprisingly tight matchup against Democrat Conor Lamb.

The 60-year-old state lawmaker has struggled unexpectedly with an electorate that favored Trump by 20 percentage points just 16 months ago. He needs the residents of Pennsylvania's 18th Congressional District to nationalize their choice and make him a proxy for what they already think about Washington, the president and the issues that define their party affiliation.

The outcome Tuesday will reverberate nationally. Democrats must flip 24 GOP-held seats to claim a House majority, and an upset will embolden them as they look to win in places where the party has lost ground in recent decades. Republicans, meanwhile, would be spooked about their prospects in this tempestuous era of Trump, who has twice visited the district on Saccone's behalf, most recently Saturday night.

Saccone has tried at times to make the race about experience, touting his four decades in the public and private sector, from an Air Force career and stint in North Korea to his current job as a college professor. He sometimes mocks his 33-year-old opponent as having "no record at all."

But that, by itself, hasn't given Saccone much traction against Lamb, a Marine veteran and former federal prosecutor. Lamb hails from an established Allegheny County political family and pitches himself as independent-minded.

Lamb keeps to party orthodoxy on unions. He blasts the new Republican tax law as a gift to the wealthy and a threat to Social Security and Medicare. "People have paid into these programs over the course of a lifetime," Lamb told more than 300 retired coal miners and Democratic activists Sunday in Waynesburg, 40 miles south of Pittsburgh. "I do not believe, as (Republican House Speaker) Paul Ryan does, that these are entitlements or another form of welfare."

Boasting a more than 3-to-1 fundraising advantage over Saccone, he's plastered his message on Pittsburgh television and animated Democrats who haven't had recent reason to care.

The party didn't even run opponents against the previous congressman, Republican Tim Murphy, in 2014 and 2016. Murphy resigned in October amid a sex scandal.

So Saccone and Republican forces have answered with their national arguments. Outside GOP groups have spent more than $10 million, much of it to paint Lamb as a Pelosi lackey. On Sunday, with Saccone holding no previously announced public events, Republican volunteers distributed handbills that urged voters to "Stop Nancy Pelosi" and "Stop Hillary Clinton."

Besides Trump's visits, the White House has jumped in with one by adviser Kellyanne Conway and a stop planned Monday by Donald Trump Jr.

Speakers at the Trump-Saccone rally Saturday repeatedly hammered Lamb, with one even holding up a Democrat, anti-abortion former Gov. Bob Casey, as a politician who actually would fight his own party.

The Pittsburgh Post-Gazette's conservative editorial board added its own interpretation Sunday. The editorialists complimented Lamb as "an impressive young man," but warned that he could become part of a Democratic majority that would try to impeach Trump. Neither Lamb nor Saccone has made the ongoing Russia investigation bedeviling Trump part of his pitch, but the paper insisted the country must not "dive into so great a distraction."

The Republican argument is enough for voters like 54-year-old Jeffrey Snelling. "I don't know much about Rick Saccone," he acknowledged, adding that he remains skeptical about Trump. His bottom line, though: "I'm not voting for any liberal who's going to advance the Democratic Party agenda."

But Lamb is apparently having enough success to worry Saccone's most high-profile backer.

"The people of Pittsburgh," Trump declared last weekend, "cannot be conned by this guy Lamb."