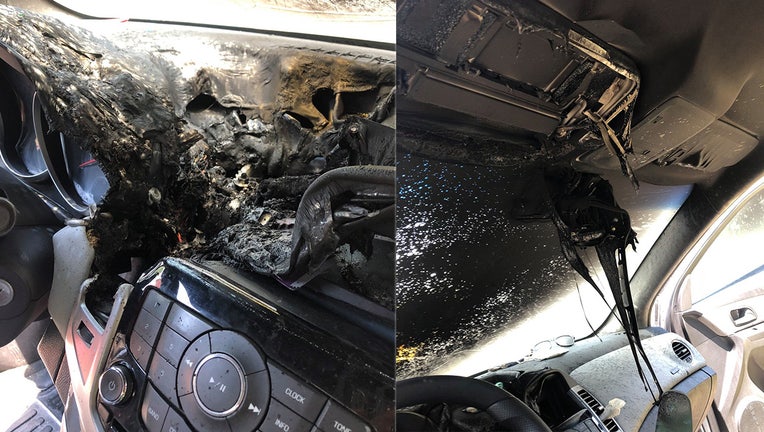 WAUKEGAN, Ill. - An Illinois fire department is warning drivers not to keep hand sanitizer in their cars amid the coronavirus pandemic. Authorities said a driver left a bottle with high alcohol content on their dashboard and it helped spark a fire.

“The fire appeared to be caused by the owner’s small bottle of hand sanitizer that was left on the dashboard," the Waukegan Fire Department wrote on Facebook.

MORE NEWS: Tennessee deputy thanks 2 black women for buying him breakfast at Cracker Barrel: 'BLM but so does yours!'

In April, the National Fire Protection Association said while hand sanitizer is flammable, it still requires an ignition source to catch fire.

“It appears sunlight shining through the windshield onto the sanitizer was enough to cause ignition,” the Waukegan Fire Department wrote in its Facebook post.

The department posted photos to Facebook showing the melted dashboard and black soot covering the windshield. As FOX News described, the plastic frame of the rear-view mirror looks like it liquefied and dripped toward the floor before hardening again.

A post from a Wisconsin fire department went viral last month after showing a photo that appeared to suggest that hand sanitizer left in a car had destroyed the interior.

The Western Lakes Fire District had posted an image of a burned driver-side door along with a warning against keeping hand sanitizer in cars, The Hill reported. But after the post went viral, authorities said the image of a burned car door was not taken in the district and was not necessarily caused by “an exploding container of hand sanitizer," according to FOX News.

In the most recent case, the Waukegan Fire Department confirmed to FOX 35 News that the photos of the damage were in fact taken by their deputy and that there are "no other potential causes'" of the fire except the hand sanitizer left in direct sunlight.

MORE NEWS: Spectacular ‘ring of fire’ solar eclipse will occur June 21, visible in some parts of the world

People have been increasingly using hand sanitizer when going out amid the coronavirus pandemic, in part due to state and federal health suggestions.