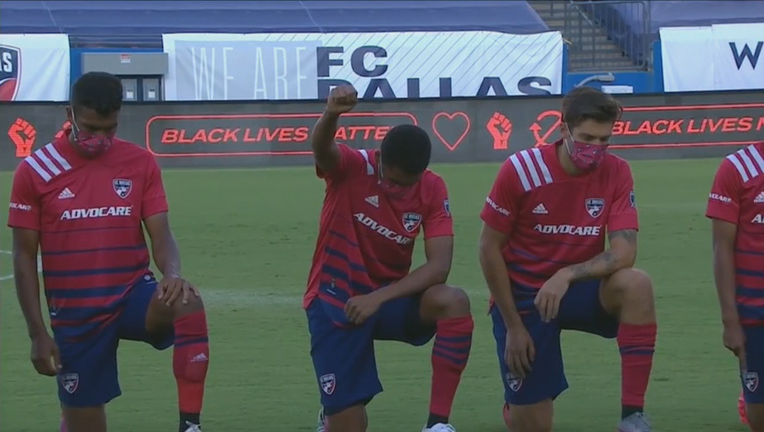 FRISCO, Texas - The owners of FC Dallas came to the defense of player Reggie Cannon after he expressed disgust at the fans who booed players who knelt during the national anthem — and then faced a backlash on social media that included threats.

Cannon made comments following the game between Dallas and Nashville SC on Wednesday night. Players from both sides as well as the officials took a knee during the anthem at Toyota Stadium, prompting a smattering of boos.

“I think it was absolutely disgusting,” Cannon said. “You’ve got fans booing you for people taking a stand for what they believe in?"

The response against Cannon was swift on social media, including comments that were racist and threatening. That prompted a statement from team owners Clark and Dan Hunt.

“We want to be clear: We love and support Reggie Cannon. The racist comments and death threats he has received are repulsive and unacceptable,” the Hunts said in the statement. “There is no place in our sport, or in our country for that matter, for the kind of horrific vitriol Reggie has had to endure today. Hateful or violent threats are never warranted — especially when they are directed toward a member of our FC Dallas family.”

It was the first game in a local market since Major League Soccer suspended it season on March 12 because of the coronavirus. The league held the MLS is Back tournament for the past month but fans were not allowed into the games at ESPN's Wide World of Sports at Walt Disney World.

Because of positive COVID-19 tests, Dallas and Nashville did not play in the tournament.

MLS is resuming the regular season, with fans in the stands if local jurisdictions allow it. At the 25,000-seat Toyota Stadium, 5,100 fans are allowed to attend.

“As we have stated consistently over many years, Major League Soccer supports players and staff who protest peacefully on behalf of equality and social justice,” Garber said in a statement. “Some of the comments made on social media following the match were appalling. We want to be very clear that MLS will not tolerate any abuse or threats to any individual player or team who decides to exercise their right to peaceful protest during the playing of the national anthem or any other pregame ceremony.”

There were reports that a fan was ejected from the game because of a bottle thrown on to the field, but it was unclear if it was connected to the anthem or the players' actions.

Cannon said the players had asked that the anthem not be played before the game because they didn’t feel it was right ``in this moment.”

“We had someone chanting U.S.A., but they don’t understand what kneeling means. They don’t understand why we’re kneeling. They can’t see the reason. They think we’re the ignorant ones,” Cannon said. “It’s incredibly frustrating. I’m sorry to have this tone, but you have to call it for what it is.”

But he also expressed sadness about the situation.