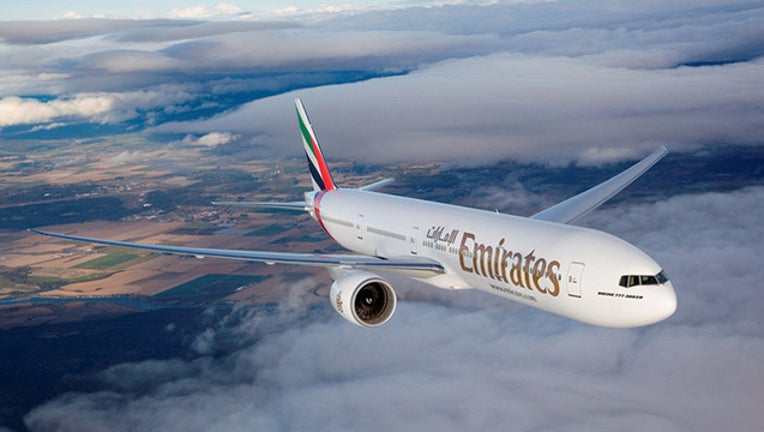 The Dubai government-owned carrier's decision is the strongest sign yet that new measures imposed on U.S.-bound travelers from the Mideast could be taking a financial toll on fast-growing Gulf carriers that have expanded rapidly in the U.S.

Dubai was one of 10 cities in Muslim-majority countries affected by a ban on laptops and other personal electronics in carry-on luggage aboard U.S.-bound flights.

The latest travel ban suspended new visas for people from Iran, Libya, Somalia, Sudan, Syria and Yemen, and froze the nation's refugee program. Like an earlier ban that also included Iraqi citizens, it has been blocked from taking effect by the courts.

Emirates said the flight reductions will affect five of its 12 U.S. destinations, with the first cutbacks starting next month.

"The recent actions taken by the U.S. government relating to the issuance of entry visas, heightened security vetting, and restrictions on electronic devices in aircraft cabins, have had a direct impact on consumer interest and demand for air travel into the U.S.," the carrier said in a statement.

Emirates does not provide financial data for its U.S. operations or individual routes, but said it had seen "healthy growth and performance" there until the start of the year.

Since Trump has been in office, however, there has been what it called "a significant deterioration in the booking profiles on all our U.S. routes, across all travel segments."

It said it is responding as "any profit-oriented enterprise would" and will use the capacity freed up by the culled routes elsewhere on its network.

The Americas region, which also includes routes to Canada and Latin America, accounted for 14 percent of the $22.75 billion in revenue Emirates pulled in during the fiscal year through the end of March 2016.

Emirates' half-year profit fell 75 percent to $214 million in the last period the company has disclosed, through last September - before the U.S. election. Executives cited increased investments including aircraft purchases and the repayment of bonds, and said a "bleak" economic outlook in many parts of the world was reducing travel demand.

Robert Mann, an aviation consultant in Port Washington, New York, said business travel between the U.S. and the Middle East has clearly been hurt by the ban on gadgets, while the attempted visa bans have put a damper on leisure travel from the countries targeted.

"Neither factor is a good thing for the Middle Eastern carriers who are primarily affected," he said.

The cuts will reduce the number of U.S.-bound flights from Dubai to 101, down from 126 currently.

Twice daily Emirates flights to Boston, Los Angeles and Seattle will fall to once a day. Daily flights to Fort Lauderdale and Orlando will be pared to five per week.

Andrew Lannon, a Canadian attorney based in Dubai, arrived in Fort Lauderdale for vacation on an Emirates flight Wednesday and said passengers had to check their electronics, which made the 18-hour flight difficult because he couldn't work.

Passengers were then told upon landing they would have to wait on the plane for an hour while their bags were checked, but were then let off after 20 minutes, Lannon said, adding that it took another hour for most passengers to clear customs.

Kevin Mitchell, head of the Business Travel Coalition in the U.S., said all the Gulf carriers are probably losing business because of the security measures and attempted travel bans, and that will hurt consumers.

Like its smaller Gulf rivals Qatar Airways and Abu Dhabi-based Etihad Airways, Emirates has ramped up its U.S. presence and recently launched a new service to Newark via Athens.

Several big U.S. carriers and their pilot unions have bristled at the Gulf airlines' U.S. push, accusing them of flooding the market with capacity while receiving billions of dollars of unfair government subsidies.

Emirates and its Gulf rivals deny the allegations.

Despite a vigorous lobbying and public relations campaign, the U.S. carriers were unable to persuade the Obama administration to block further expansion by Gulf airlines. But U.S. airline executives made a personal pitch to restrict their access during a White House meeting with Trump earlier this year.

Jill Zuckman, a spokeswoman for the "Partnership for Open & Fair Skies" campaign opposing more U.S. routes for the Gulf carriers, was quick to seize on Emirates' decision.

"The fact is, market demand has never played a role when the Gulf carriers decide where to fly. It is well known that the Gulf carriers, including Emirates, lose money on most of their flights to the United States and are propped up by billions of dollars in government cash," she said.

The U.S. travel industry, already fretting that the ban on travelers from a number of Muslim-majority nations is affecting foreign travel generally to the United States, expressed fresh concern after Emirates' announcement, however.

"The aftermath of 9/11 taught us that we can't take either global understanding or U.S. market share for granted," said Jonathan Grella, executive vice president the U.S. Travel Association. "Every limiting security message needs to be offset by a sincere welcome to legitimate, lawful travelers."