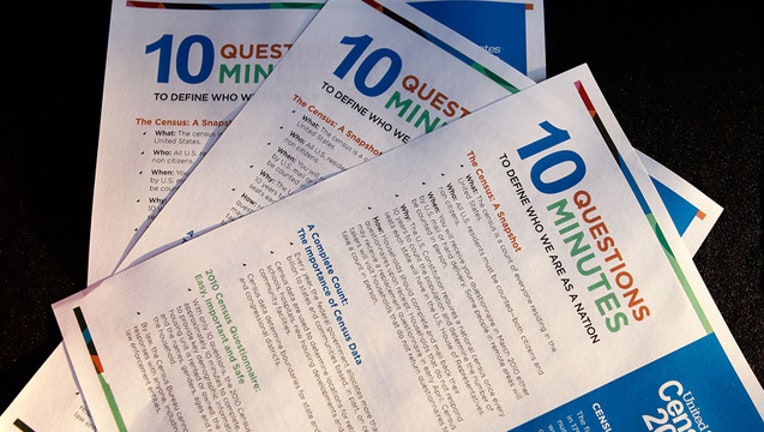 Forms for Census 2010 are displayed during an event to promote the census. (Photo by Alex Wong/Getty Images)

WASHINGTON (AP) - The 2020 U.S. Census will add a question about citizenship status, a move that brought swift condemnation from Democrats who said it would intimidate immigrants and discourage them from participating.

The population count taken every 10 years is more than an academic exercise. It's required by the Constitution and used to determine the number of seats each state has in the House as well as how federal money is distributed to local communities. It helps communities determine where to build schools, hospitals, grocery stores and more.

Congress delegates to the commerce secretary the authority to determine census questions. Commerce Secretary Wilbur Ross had until the end of March to submit the list of questions to Congress. The department said the citizenship information would help the Justice Department enforce the Voting Rights Act, which protects minority voting rights and helps prevent the unlawful dilution of the vote on the basis of race.

A coalition of state attorneys general urged the department last month to not add such a question, saying it could lower participation among immigrants and cause a population undercount.

California Attorney General Xavier Becerra said the state will sue the Trump administration over its decision.

"We're prepared to do what we must to protect California from a deficient Census," he said.

Massachusetts Secretary of State William Galvin, a Democrat, told AP on Tuesday that he expected his state would also join in a lawsuit. He called the move by Ross an attempt to suppress the count in states such as Massachusetts that have large immigrant populations.

"The Constitution requires us to count every person living in the United States, not every citizen," Galvin said.

House Democratic leader Nancy Pelosi said Tuesday that adding such a question "will inject fear and distrust into vulnerable communities and cause traditionally undercounted communities to be even further under-represented, financially excluded and left behind."

Democratic lawmakers had been bracing for the decision in recent months. They've held press conferences and made it a point to question Ross about his thinking during appearance at congressional hearings. Rep. Carolyn Maloney, D-N.Y., introduced legislation last week that would prohibit the commerce secretary from enacting any major operational design that had not been researched and tested for less than three years prior to the opening day of the census. The bill has nine Democratic co-sponsors, but no Republicans have signed on, demonstrating the bill's dim prospects in the GOP-led Congress.

Some Republican lawmakers hailed the decision on Tuesday. GOP Sens. Jim Inhofe of Oklahoma, Tom Cotton of Arkansas and Ted Cruz of Texas had sent a letter to the Commerce Department asking Ross to add the question.

"It is imperative that the data gathered in the census is reliable, given the wide ranging impacts it will have on U.S. policy," Cruz said in a press release issued by the three lawmakers. "A question on citizenship is a reasonable, commonsense addition to the census."

The Commerce Department said that between 1820 and 1950, almost every decennial census asked a question on citizenship in some form. The Census Bureau now asks about place of birth, citizenship and year of entry on a separate survey conducted every year called the American Community Survey, sampling only a portion of the population. The citizenship data help agencies and policymakers evaluate immigration policy and understand how different immigrant groups are assimilated.

The Justice Department said in a statement it was important to restore the use of a citizenship question in the 10-year census because it's used for redistricting purposes and the yearly survey is not the most appropriate data to use for that purpose.

"The Justice Department is committed to free and fair elections for all Americans and has sought reinstatement of the citizenship question on the Census to fulfill that commitment," the department statement read.