Mata says the way evidence was presented in the trial made it seem like he gave her preferential treatment. However, he says that is not the case.

Dallas Police Chief Renee Hall announced an internal affairs investigation into that and other issues that sprouted from other courtroom discoveries.

Since trial testimony came to light that Mike Mata went to the crime scene the night of the shooting and spoke with Amber Guyger, some have called for him to resign from the Dallas Police Association. He says he is not going anywhere and that he did nothing wrong.

“Absolutely nothing,” Mata said. “I did exactly the same thing that I had done for seven years as a critical response board member of this organization.”

Mata says he is not the one who classified it as an officer-involved shooting when Guyger shot Jean while she was off duty. He says that is what command staff on scene told him.

During testimony, prosecutor Jason Hermus questioned Dallas Police Sergeant Breanna Valentine about Mata instructing her to turn off the in-car camera video system and taking Guyger out of the squad car.

In response, Mata pointed out that officers — like civilians — have certain protections under attorney-client privilege. Mata did not deny telling the sergeant to turn the camera off.

“Absolutely, I did,” he said. “That’s normal protocol because she doesn’t have a choice of where she sits. She’s told to sit in a car. We cannot tape a conversation between an attorney and a client, even if it’s a normal day citizen.”

Mata admits he took Guyger out of the car and talked to her.

“What I told her then was stop talking to people,” he said. 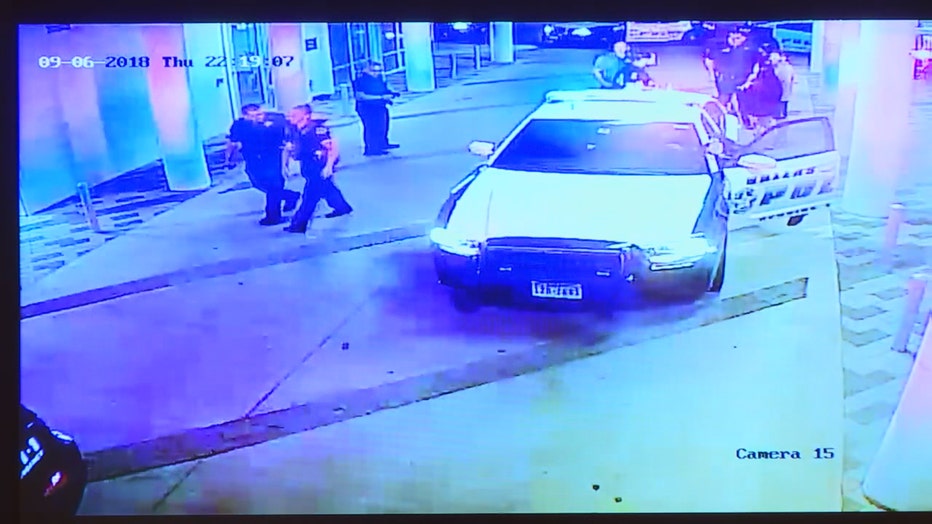 Dallas Police Association President takes Amber Guyger out of the back of a squad car to talk to her the night of the Botham Jean shooting.

In a statement, Dallas County Assistant DA Jason Hermus said: “I asked Mata what he did and said. I cannot coach a witness. He chose not to mention taking the defendant out and away from the squad car she was asked to be in. He also chose not to mention asking another sergeant to turn off the in-car recording system. I don’t know if this comports or violates DPD policy, and that was not my point.”

“Absolutely,” he said. “I want them to investigate because I want my name cleared.”

FOX 4 asked Dallas PD whether the command staff on scene did tell Mata that it was an officer-involved shooting.

“The initial response on scene was that Officer Guyger was acting in the capacity of a courtesy officer at the apartment complex,” the department responded. “It was determined later that morning that she was not.