Before Dallas Police Chief Renee Hall said a word about her plan to reduce violent crime in the city, Mayor Eric Johnson said the plan’s goal was not good enough.

DALLAS - Before Dallas Police Chief Renee Hall said a word about her plan to reduce violent crime in the city, Mayor Eric Johnson said the plan’s goal was not good enough.

The chief’s plan was requested by the mayor and released earlier this month. It calls for a 5 percent reduction in violent crime.

Last year, the city of Dallas saw more than 200 homicides for the first time in more than a decade. As a result, the mayor asked Dallas Police Chief Renee Hall to submit a report on ways to stop the violence.

Some see merit in Chief Hall’s 26-page plan but others are calling it 'window dressing.'

“A target of citywide 5 percent reduction in violent crime is not going to cut it for me,” the mayor said.

Johnson asked for a plan to reduce violent crime in Dallas, and he is not pleased with the plan he got, which he says didn’t address the causes for the violent crime surge.

“Whatever those causes may have been, we should be throwing everything at reversing these disturbing trends,” he said.

In 2019, aggravated assaults and homicides both skyrocketed by 27 percent, and robberies went up 14.5 percent.

Johnson said the city’s increase in crime was unprecedented across the country. He said the chief’s goal should at least be to bring violent crime levels back to 2018 levels. 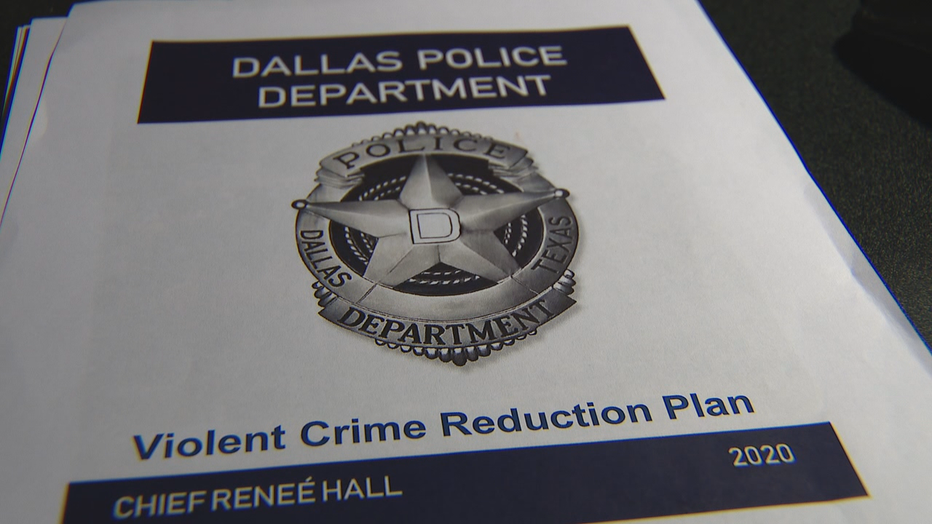 “If it is unreasonable to return to where the city stood just one year ago with respect to violent crime with the same police staffing levels and an economy that has actually improved in that time at a city that looks identical to the one we have today, then I would like to hear why,” Johnson said.

Chief Hall explained she wanted her goal to be achievable.

“It was realistic. We wanted to ensure we did not give our officers a benchmark that we believed they may not be able to exceed.”

Chief Hall points narcotics, guns and gangs are the three driving factors behind the surge in violent crime. Hall believes her plan, led by intelligence-driven data, will work.

“Everyone standing here behind me is committed to going out there and giving it everything we have,” she said.

Councilwoman Cara Mendelsohn said she was disappointed in the chief’s goal.

“I think it is outrageously low to have a five percent goal,” the councilwoman said. “And that that was your goal tells me so many things that are disappointing.”

Council members also criticized the chief’s plan to spend $300,000 to study the culture of the police department.

“Chief, if you don’t know the culture of the department already…” said Councilman Omar Narvaez. “Maybe I don’t understand what you’re asking, but you’ve been here as long as I have.”

Chief Hall defended the reason for the study.

“We know that culture eats policy and strategy for lunch,” she said. “And so what we have to make sure that we understand that we’re intentional about is making sure everybody is on the same page.”

Mendelsohn pressed the police chief to explain what in her plan is different from what the police department has already been doing. The chief said that warrant roundups in the past were random, but they will now focus every month on targeting the top 100 most violent offenders.

The rank and file is ready to hit the ground running.

“At the end of the day, it's still up to us Dallas police officers to get the job done,” Black Police Association of Dallas President Terrance Hopkins.

“We're at a point where we have to have results,” Dallas Police Association President Mike Mata. “We have had tragic, tragic violent crime in 2019 and unfortunately violent crime in Jan. 2020, and it's unacceptable.”

Some Dallas residents who attended the meeting agree and are eager to see positive results.