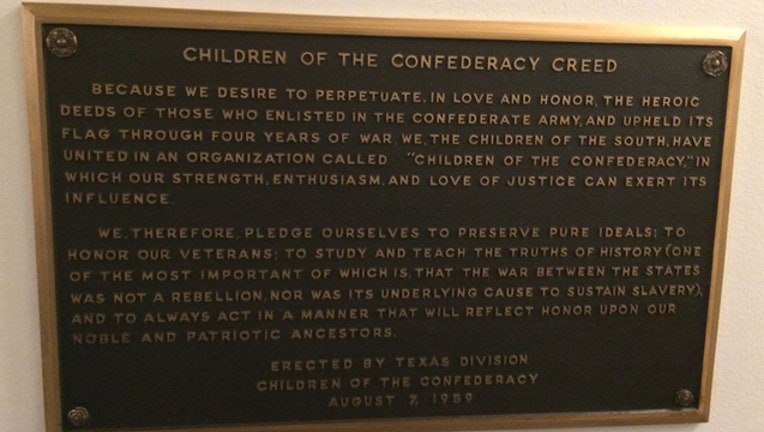 AUSTIN, Texas (AP) - A black Democratic lawmaker called on Texas to immediately remove a Confederate plaque in the state Capitol that rejects slavery as an underlying cause of the Civil War after the state's attorney general said Wednesday that a legislative vote isn't needed.

"We could get out the screwdrivers today," said Eric Johnson, a state representative in Dallas.

The plaque is one of about a dozen Confederate markers in and around the Texas Capitol. It was installed in 1959 but has drawn bipartisan disapproval after attention on confederate symbols intensified following last year's deadly clash at a white nationalist rally in Charlottesville, Virginia.

The plaque, which was donated by the Children of the Confederacy, vows to preserve "pure ideals" and "teach the truths of history." Then it adds: "One of the most important of which is that the war between the states was not a rebellion, nor was its underlying cause to sustain slavery."

Republican Gov. Greg Abbott has signaled support from removing the plaque but has said he won't order it taken down.

Instead, Abbott says the decision should rest with the Legislature, arguing that it was lawmakers a half-century ago who voted to put it up in the first place.

But Johnson, who privately met with Abbott last year, said an opinion issued by Texas Attorney General Ken Paxton's office makes clear that the state is empowered to act now. He also said that getting approval next year in the Texas Legislature, which Republicans control, is no certainty.

"It could be a slam dunk. It could not be," Johnson said. "But it would get bogged down in politics. There is no need for that."

The opinion from Paxton's office has been long-awaited as frustration over the plaque has simmered. The opinion says the Legislature, the State Preservation Board, which acts as curator for the Capitol, and the Texas Historical Commission all have the authority "to remove or relocate monuments or memorials such as the plaque."

Spokespeople for Abbott and the State Preservation Board did not return messages seeking comment.

Last year, Abbott resisted calls to take down Confederate markers following the clash in Charlottesville, saying at the time that racism and hate-filled violence were unacceptable but that removing monuments won't erase the past.