Dallas ISD teachers protested ahead of Thursday’s school board meeting to demand change to the current teacher merit pay system.

It's a complaint the teachers have had for years. This protest happens every year once test scores from last year come out because that is, in part, how it’s decided how much money Dallas teachers will make.

Some teachers just received a raise. Others didn’t. And they came to protest that system.

The Dallas teachers were not slotted on the school board agenda Thursday night. Still, they showed up to protest the point system that determines how much they’re paid. 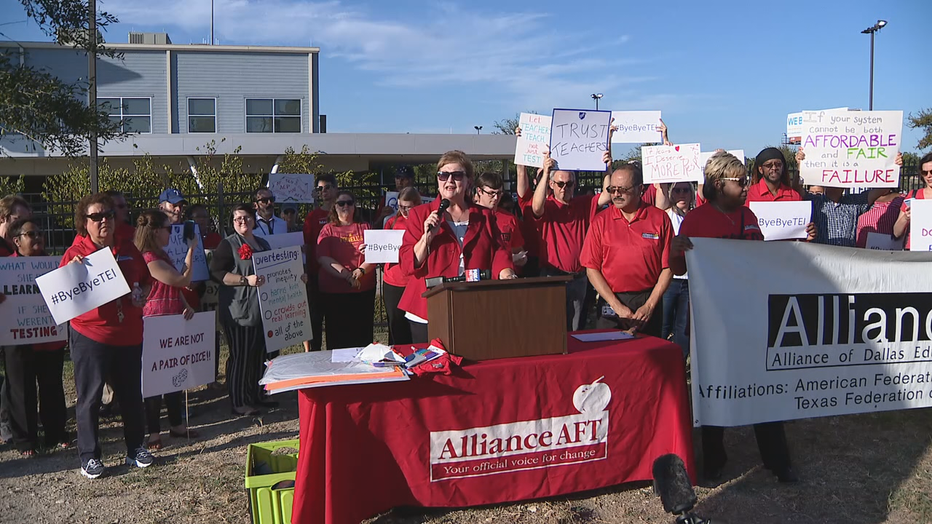 The system is called the Teacher Excellence Initiative, or TEI, and it’s been around since 2014. It weighs student performance on tests into teacher salary.

But Dallas ISD says the merit pay system is causing teachers to keep teaching in the district. They cite statistics that show a spike in retention since TEI went into effect.

The numbers do not satisfy Rena Honea, the president of Alliance AFT.

“What we’ve been seeing over the years is that many of our teachers, especially those in mid-careers and long-time careers, are missing these cut-off points by one or two points every single year,” she said. “So that means their compensation stays at the same.”

For the teachers, the concern is ultimately for the students.

“Our students are doing well,” Honea said. “But they could be doing so much more if teachers could truly teach.”

The district has no plans to address the pay system. The district points to statistics saying that is causing improvement in areas.