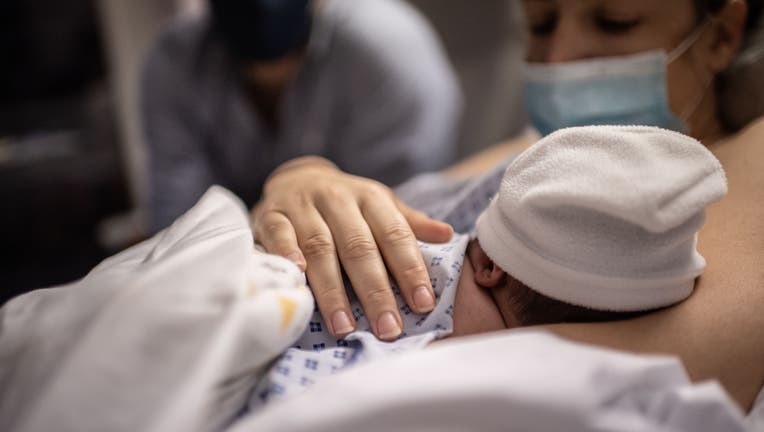 A father and a mother look at their newborn son during the Covid-19 pandemic, novel coronavirus at the maternity of the Diaconesses hospital in Paris, on November 17, 2020. (Photo by Martin BUREAU / AFP) (Photo by MARTIN BUREAU/AFP via Getty Images)

SALT LAKE CITY (AP) - Biological fathers in Utah will be legally required to pay half of a woman’s out-of-pocket pregnancy costs under a new law unique to the state that critics say doesn’t do enough to adequately address maternal healthcare needs.

The bill’s sponsor has presented the measure as an effort to decrease the burden of pregnancy on women and increase responsibility for men who have children. But some critics argue the new legislation won’t help women who are most vulnerable and could make abusive situations even more dangerous for pregnant women.

Utah appears to be the first state to mandate prenatal child support, according to the state’s Planned Parenthood association and the bill’s sponsor. But a few states, including Wisconsin and New York, have provisions that can result in fathers being financially responsible for pre-birth expenses.

Republican Rep. Brady Brammer said he decided to sponsor the measure because he had grown frustrated with the number of anti-abortion measures going through the Legislature and wanted to pursue legislation that would make it easier to bring life into the world.

"We want to help people and actually be pro-life in how we do it as opposed to anti-abortion," Brammer said. "One of the ways to help with that was to help the burden of pregnancy be decreased."

The bill would apply to a pregnant woman’s health insurance premiums and any pregnancy-related medical costs, Brammer said.

If the paternity of the child is disputed, fathers won’t be required to pay until after paternity is established. The father also wouldn’t be financially responsible for the cost of an abortion received without his consent unless it’s necessary to prevent the death of the mother or if the pregnancy was the result of rape.

In Utah, mothers already have the option to seek support related to birth expenses through the courts but few do, said Liesa Stockdale, director of the state’s Office of Recovery Services, which typically collects child support. She said mothers will now have the option to also seek pregnancy-related payments through the legal system, but it’s unclear how often they will pursue it.

"I don’t know how often it will be used," Stockdale said. "That’s yet to be seen how often parents will choose to pursue these costs. But certainly if they do, we’re here to collect."

The bill is not intended to lower the frequency of abortions, but Brammer said that could be a potential result.

Anti-abortion activists have lauded the bill, however, saying it will protect the lives of unborn children by supporting women through their pregnancy. Merrilee Boyack, chairman of the Abortion-Free Utah coalition, said she hopes this bill will decrease abortions in the state by lessening economic pressures on new moms.

"Anything we can do to support women in these circumstances will help them be able to give birth to their babies, feel good about that choice and feel supported along the way," Boyack said.

The new legislation comes on top of a long list of restrictions Utah has placed on abortion. Last year, the state approved a measure that would make abortions illegal if the U.S. Supreme Court overturns the decades-old ruling that legalized it nationwide. The Utah measure would make it a felony to perform the procedure, except in cases involving rape, incest and serious threat to the life of a mother.

Other Republican-governed states have been considering an array of tough anti-abortion restrictions this year. Sweeping abortion bans have already been signed into law in South Carolina and Arkansas.

Democratic lawmakers and women’s rights activists have questioned whether the new legislation on fathers helping to cover costs will actually meet women’s needs.

Barker also said she doesn’t believe this legislation will lead to fewer women having abortions because the costs of pregnancy are typically small compared with the costs of raising a child.

"In the grand scheme of things, having a child and raising them to adulthood is going to be a lot more money," Barker said.

The average cost of raising a child is $233,610 – excluding the cost of college – for a middle-income family, according to a 2015 report from the U.S. Department of Agriculture. The cost of an abortion can range from being free to up to $1,000 depending on location and whether the mother has health insurance, according to Planned Parenthood.

Domestic abuse tends to escalate during pregnancy and seeking these costs could further increase stressors about financially supporting a baby, said Gabriella Archuleta, a public policy analyst with YWCA Utah, which provides services to domestic violence survivors. About 324,000 pregnant women are abused each year in the United States, according to data from the American College of Obstetricians and Gynecologists.

Archuleta also noted that this measure doesn’t equitably address the high cost of navigating the legal system and will likely only serve women who are wealthier or have wealthy partners.

"On the surface of it, it sounds like a good idea," Archuleta said. "But what we’re here to do is look at some of the nuances and how it impacts women, and I don’t think those nuances were really explored to the extent that they should have been."

Eppolito is a corps member for the Associated Press/Report for America Statehouse News Initiative. Report for America is a nonprofit national service program that places journalists in local newsrooms to report on undercovered issues.