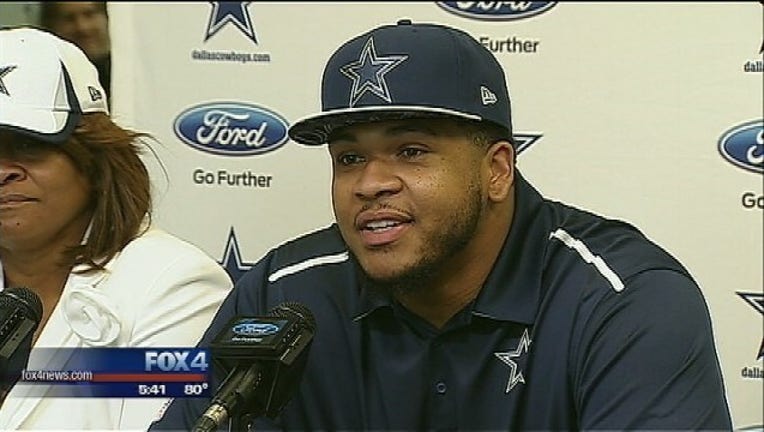 The Dallas Cowboys signed La'el Collins on Thursday, bringing in the former LSU offensive tackle who had been a projected first-round pick in last week's NFL draft until his name came up in a police investigation.

Collins, a 2014 All-Southeastern Conference lineman, has never been named a suspect or person of interest in the shooting death of 29-year-old Brittney Mills. Police acknowledged days before the draft that they wanted to talk to Collins because he knew the victim, who was eight months pregnant when she was gunned down at her home in late April.

After he went undrafted, Collins met with police, who say he has answered all of their questions. Collins also submitted to a paternity test that proved he is not the father of Mills' infant son, who was born alive after the shooting but died days later.

Also, bonuses are limited to about $87,000 for all undrafted free agents combined.

"It's not even about the money," Collins said as he sat between his mother, Loyetta, and Cowboys owner Jerry Jones at a news conference announcing the deal. "I never played the game for the money. I played the game because I love the game.

"Just to be here, I'm still getting paid. And at the end of the day, it was way more than I was getting in college," he said as laughter broke out among reporters.

The 6-foot-4, 305-pound Collins is a Baton Rouge native who was rated among Louisiana's top high school prospects in 2010, when he committed to play near home.

He was eligible for the 2014 draft, but elected to play for LSU as a senior to further refine his game. Initially, it appeared to pay off when he was projected as first-round choice this year.

Baton Rouge police Lt. Jonny Dunnam has said police understood the timing of the investigation was unfortunate for Collins. He also stressed that Collins currently is "no more a person of interest than a neighbor would be."

When the Cowboys announced Collins' signing, they said he could play either guard or tackle. Collins likely would prefer to play tackle, giving him more leverage when he is able to negotiate a new contract.

In the meantime, if Collins plays to his potential, the Cowboys likely will get exceptional value for his services the next few seasons, regardless of where he plays.