The cleanup is continuing in Bowie after Friday night’s EF-1 tornado damaged hundreds of homes and dozens of businesses.

BOWIE, Texas - The cleanup is continuing in Bowie after Friday night’s EF-1 tornado damaged hundreds of homes and dozens of businesses.

“It blew that door open and sucked that door in,” Michael Allred said.

Allred’s been making repairs to his home for quite some time.

Now, the list of repairs is, quite literally, through the roof.

“Ripped the roof off the living room,” Allred said.

He was home when a tornado and straight line winds ripped through his city.

“The windows blew, the door blew open,” he recalled.

He lives by train tracks and said he’s used to the sound of freight trains.

“But there was no freight train coming through this time,” he said.

This time, it was the sound of Mother Nature connecting with his home, which was one of at least 200 damaged by the storms. 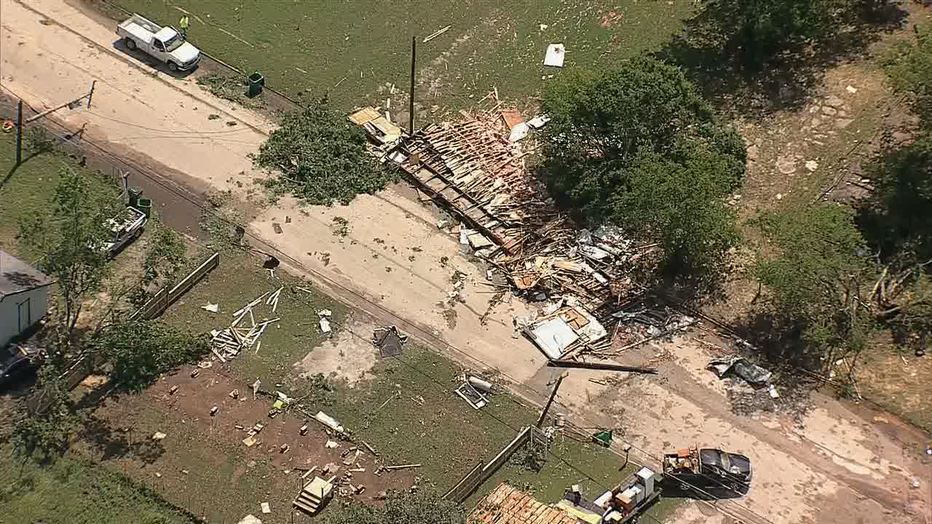 “They all got some damage, windows blown out or the roofs, shingles missing,” realtor Doyle Seigler said.

Dozens of businesses are also cleaning up.

“I guess the first thing that comes to my mind is we’re an old city. We have a lot of old buildings,” Bowie Mayor Gaylynn Burris said.

Burris said she’s concerned the city’s character, that’s been preserved for decades, may never be the same.

“I don’t want people to give up,” Burris added.

Roofs are missing, there is smashed glass, downed power lines, and there are a lot of piles of debris.

You cannot put a price tag on the damage that’s been done for the ones living and working in the area.

“Well, we have to do a lot more work before we find out what our monetary damages are here,” Burris said.

Kit Hutson and her daughter, Lexi, said the downtown buildings their family owns are significantly damaged. Now, they’re having to clean them out with rain storms expected to come in this week.

“We lost our building over there, too,” Lexi said.

“But today, our goal is to get it completely empty,” Kit said.

The non-profit Samaritan’s Purse is one of several organizations helping clean up. It’s not an easy task. There’s no telling how long it’ll take to find a sense of normalcy.

“Well, once the windows and doors went, we were getting wet,” Allred recalled.

Allred’s family doesn’t know where to begin. Still, he cannot believe that through all of this damage, no one was seriously hurt.

“And we were standing here last night when the ceiling fell,” he said. “I’ve never been actually in the tornado. I’ve been in lots of wind storms.”