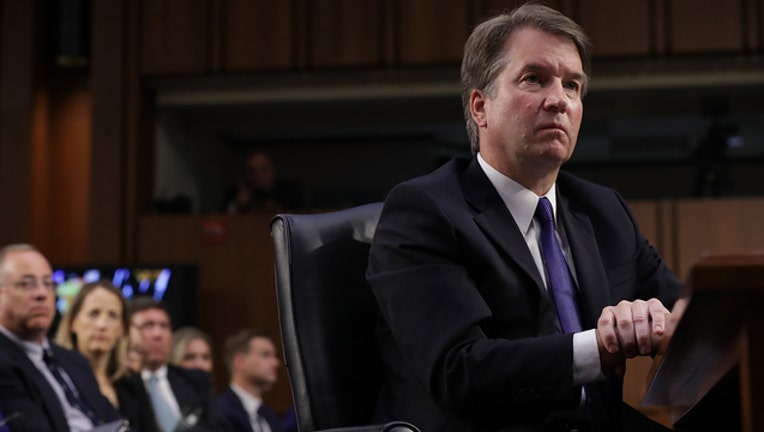 WASHINGTON - The Senate Judiciary Committee has scheduled a hearing Thursday for Supreme Court nominee Brett Kavanaugh and Christine Blasey Ford, a woman who says he sexually assaulted her as a teenager, as a claim of sexual misconduct emerged from another woman.

The New Yorker said 53-year-old Deborah Ramirez described the incident in an interview after being contacted by the magazine. Ramirez recalled that Kavanaugh exposed himself at a drunken dormitory party, thrust his penis in her face, and caused her to touch it without her consent as she pushed him away, the magazine reported.

The magazine reported that Ramirez was reluctant at first to speak publicly "partly because her memories contained gaps because she had been drinking at the time of the alleged incident." She also acknowledged reluctance "to characterize Kavanaugh's role in the alleged incident with certainty."

The magazine reports that after "six days of carefully assessing her memories and consulting with her attorney, Ramirez said that she felt confident enough of her recollections" to recall the incident.

The new information came hours after the Senate committee agreed to a date and time for a hearing after nearly a week of uncertainty over whether Ford would appear to tell her story.

The agreement and the latest accusation set the stage for a dramatic showdown as Kavanaugh and Ford each tell their side of the story. The developments could also determine the fate of Kavanaugh's confirmation, which hangs on the votes of a handful of senators.

It had seemed assured before Ford, a 51-year-old California college professor, went public a week ago with her allegation that Kavanaugh assaulted her at a party when they were in high school.

Kavanaugh, 53, an appellate court judge, has denied Ford's allegation and said he wanted to testify as soon as possible to clear his name.

Senate Judiciary Committee Chairman Chuck Grassley, R-Iowa, wrangled with Ford's lawyers for the last week over the exact terms of her appearance. She made several requests, some of which were accommodated — a Thursday hearing, three days later than originally scheduled, and a smaller hearing room with less press access to avoid a media circus, for example. Grassley's staff also agreed to let Ford testify without Kavanaugh in the room, for there to be only one camera in the room, "adequate" breaks and a high security presence.

The committee said it would not negotiate on other points, though, including Ford's desire for additional witnesses and a request to testify after, not before, Kavanaugh.

"As with any witness who comes before the Senate, the Senate Judiciary Committee cannot hand over its constitutional duties to attorneys for outside witnesses," Mike Davis, Grassley's top nominations counsel, wrote in an email exchange with Ford's lawyers obtained by The Associated Press. "The committee determines which witnesses to call, how many witnesses to call, in what order to call them, and who will question them. These are non-negotiable."

Ford's lawyers said it was still unclear who will ask questions, as Republicans were trying to hire an outside female counsel who could take over the questioning. The 11 senators on the GOP side of the dais are all men, which could send an unwanted message on live television against the backdrop of the #MeToo era. They could also use Republican staff attorneys on the committee.

Democratic senators were expected to ask their own questions.

"We were told no decision has been made on this important issue, even though various senators have been dismissive of her account and should have to shoulder their responsibility to ask her questions," the attorneys for Ford said in a statement.

As he builds a case for his innocence, Kavanaugh plans to turn over to the committee calendars from the summer of 1982 that don't show a party consistent with Ford's description of the gathering in which she says he attacked her, The New York Times reported Sunday. The newspaper reported that it had examined the calendars and noted they list basketball games, movie outings, football workouts, college interviews, and a few parties with names of friends other than those identified by Ford.

A person working on Kavanaugh's confirmation confirmed the Times account to The Associated Press. The person spoke on the condition of anonymity to discuss the matter.

Earlier Sunday, Sen. Lindsey Graham, a South Carolina Republican on the Senate Judiciary Committee, said lawyers for Ford were contesting two GOP conditions — that Ford and Kavanaugh would be the only witnesses and that an independent counsel would ask the questions.

"If they continue to contest those two things, there won't be a hearing," Graham said. "We're not going to let her determine how many people we call" and on outside counsel. "I hope she comes."

Graham, speaking on "Fox News Sunday," promised a fair hearing in which both Ford and Kavanaugh "will be challenged" but said "unless there's something more" to back up her accusation, he indicated he will vote to confirm Kavanaugh. Graham said he's "not going to ruin Judge Kavanaugh's life over this."

One issue that appeared to have been resolved in Sunday's hourlong phone call between Judiciary staff and Ford's lawyers was the committee's refusal to subpoena Mark Judge, the other person Ford alleges was in the room when the assault occurred. Judge has told the committee he does not recall the incident.

The lawyers for Ford want the committee to hear from other witnesses, including a person who conducted a polygraph of Ford earlier this year, the person familiar with the talks said. Ford's lawyers also want to call on two trauma experts, the person said.

Sen. Dick Durbin, an Illinois Democrat on the committee, said Sunday he believed Ford's requests have been reasonable and that she deserves a fair hearing to determine whether her allegations are serious enough to vote down Kavanaugh's nomination.

Durbin acknowledged that lawmakers will "probably not" be able to know the truth of Ford's decades-old accusation. But Durbin left little doubt that that Democrats will go after Kavanaugh's drinking history to help shed light on the matter. Ford has alleged Kavanaugh was "stumbling drunk" when it happened.

Durbin told ABC's "This Week" that some Republicans "reached out to Democratic senators and assured them that they are looking to this as kind of a determination as to how their final vote" on Kavanaugh is cast.

Democrats again called for the FBI to investigate Ford's claims, a request that was unlikely to be met as President Donald Trump and Senate Republicans have said it's unnecessary. Senate Democratic leader Chuck Schumer of New York and the top Democrat on the Senate Judiciary Committee, California Sen. Dianne Feinstein, sent a letter to Trump on Sunday saying the FBI has more than enough time to investigate before Ford and Kavanaugh testify on Thursday.

Republicans viewed the demands for an investigation, and Ford's various requests, as a way to delay voting on Trump's nominee. They have also cast some doubt on Ford's allegations, with the Judiciary panel announcing that it had investigated the incident and talked to three other people who Ford has told The Washington Post were at the party — Judge, Patrick J. Smyth and Leland Ingham Keyser. The committee said all three told investigators that they had no recollection of the evening in question.

The Post reported Sunday that Keyser said in a brief interview at her home that she still believes Ford, even if she doesn't remember the party.

The White House is approaching Ford's potential testimony with trepidation, nervous that an emotional performance might not just damage Kavanaugh's chances but could further energize female voters to turn out against Republicans in November.

Moreover, the West Wing aides who had urged Trump to remain muted in his response to the accusations worried about how the president might react to an hours long, televised hearing. Trump broke his silence to cast doubt on Ford's story Friday in ways Republicans had been carefully trying to avoid. He said Kavanaugh was "under assault by radical left-wing politicians" and suggested Ford should have filed charges as a 15-year-old when she was attacked.

Trump mused to confidants that the "fake" attacks against his nominee were meant to undermine his presidency, according to a White House official and a Republican close to the White House. Both spoke on condition of anonymity because they were not authorized to discuss private conversations.