Phoenix woman arrested, accused of stabbing her mother while she was driving

Just a day after police in Phoenix asked for the public's help in finding her, Brenda Villela is behind bars. FOX 10's Nicole Garcia reports.

PHOENIX - Officials with the Phoenix Police Department say a woman has been arrested in connection with a stabbing incident that left her mother seriously hurt.

In a statement released March 18, officials announced the arrest of 27-year-old Brenda Villela, one day after they asked for the public's help in finding her.

The stabbing that allegedly involved Villela, according to officials, happened at around 5:20 a.m. on March 16 in the area north of 7th Avenue and Broadway Road.

"Ms. Brenda Villela stabbed her mother multiple times while the victim was driving. The suspect’s actions caused the vehicle to crash. After the vehicle crashed the suspect fled on foot," read a portion of the statement released by Phoenix Police on March 17.

Villela's mother, according to officials, was taken to the hospital, and was initially in critical condition. She is currently listed in stable condition. The victim's relatives say they expect her to recover. They also believe the suspect was angry at her mother over a child custody issue. 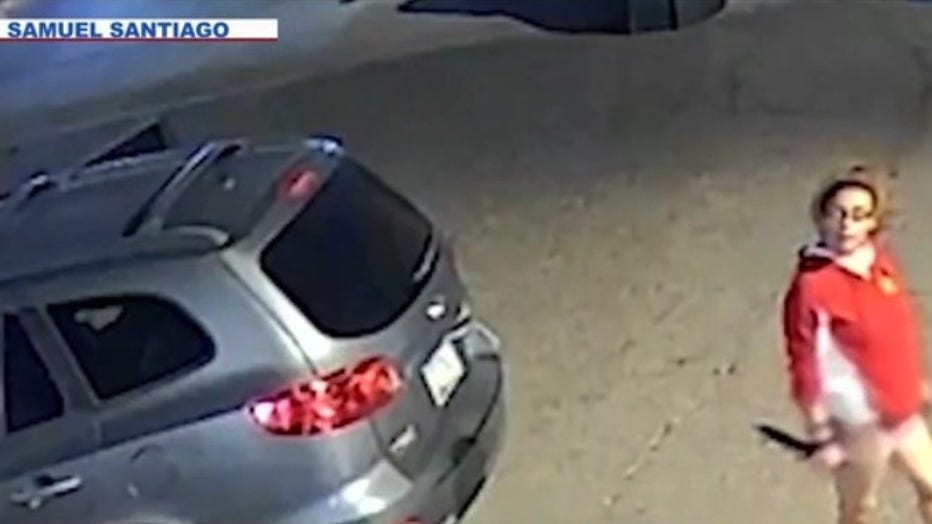 The victim's family shared surveillance video from hours before the attack showing the suspect with a knife. (Samuel Santiago)

In surveillance video, the suspect was seen in the driveway of the family's home at around 3:00 a.m. on March 17. In the video, Villela was seen holding a large knife.

According to family members of the victim, the suspect hid in the back seat of her mother's car, and stabbed her as she was driving to work. The mother ended up crashing her car. She managed to call her family, who rushed to the scene.

"They see her car crashed into a wall and a tree. There was a tow truck driver there who saw it, and they told him Brenda just jumped out and ran," said the suspect's brother, Samuel Santiago. "Brenda stabbed [the victim] six times."

"CPS has had to come in and give custody over to my mom for the time being, until Brenda gets better," said Santiago.

Villela was reportedly located on the morning of March 18 at a south Phoenix gas station.

"She was talking with two of her friends, and they turned her in," said Santiago.

Villela, according to officials, is accused of a count of attempted homicide, two counts of aggravated assault, a count of burglary, endangerment, and criminal damage.

LiveNOW From FOX - Streaming live events, breaking news, and stories from the U.S. and around the world