Superior Court Judge Jeffery B. Foster decides against the release of body cam footage in the Andrew Brown Jr. case.

A judge has ruled of body camera footage that shows the death of Andrew Brown Jr., the Black man killed by deputies last week in North Carolina, may be released in 30 days.

According to the Associated Press, Judge Jeffery Foster said he believed the videos contained information that could harm the ongoing investigation or threaten the safety of people seen in the footage. He said the video must remain out of public view for at least 30 days.

District Attorney Andrew Womble told Foster at a hearing Wednesday that the video shows Brown hit deputies with his car before they opened fire.

Petitions to release the footage had been filed a media coalition and by the county attorney on behalf of the sheriff. A North Carolina law that took effect in 2016 allows law enforcement agencies to show body camera video privately to a victim's family, but it generally requires a court to approve any public release.

Womble said in court he disagreed with a characterization made by attorneys for Brown’s family that Brown’s car was stationary when the shooting started.

Womble said the video shows that Brown’s car made contact with law enforcement twice before shots could be heard on the video. 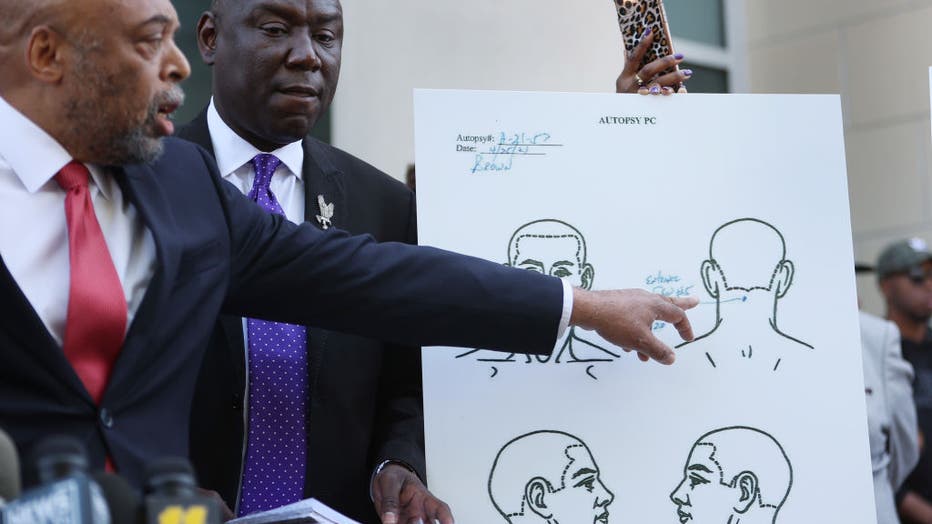 Brown, a 42-year-old Black man from Elizabeth City, North Carolina, was shot to death last week by one or more deputy sheriffs trying to serve drug-related search and arrest warrants, authorities said. An eyewitness said Brown tried to drive away but was shot dead in his car.

Womble argued that the video, a portion of which was shown to the family on Monday, should be kept from the public for another month so that state investigators can make progress on their probe of the shooting.

It's not clear how soon a judge could rule or how quickly the video would be released if the release is approved. In similar cases, it has sometimes taken weeks for the full legal process to play out.

On Tuesday, attorneys for Brown’s family said that an independent autopsy showed Brown was shot five times, including once in the back of the head.

Attorneys for the family of Andrew Brown Jr., a Black man killed in Elizabeth City, North Carolina by deputies, said at a news conference that an independent autopsy showed he was shot five times, including once in the back of the head.

The pathologist, North Carolina-based Dr. Brent Hall, noted a wound to the back of Brown’s head from an undetermined distance that penetrated his skull and brain. He said there was no exit wound. Two shots to Brown’s right arm penetrated the skin. Two others shots to the arm grazed him.

The state’s autopsy has not been released yet.

The family's lawyers also released a copy of the death certificate, which lists the cause of death as a "penetrating gunshot wound of the head." The certificate, signed by a paramedic services instructor who serves as a local medical examiner, describes the death as a homicide.

RELATED: Andrew Brown Jr. family attorneys say he had hands on steering wheel, was shot in back of head

The autopsy results come a day after Brown's relatives were shown a 20-second clip of footage from one deputy's body camera. One of the Brown family lawyers, Chantel Cherry-Lassiter, who viewed the video, said Monday that officers opened fire on Brown while he had his hands on the steering wheel of a car. She said the video showed Brown trying to drive away but posing no threat to officers.

On Tuesday, the FBI launched a civil rights investigation into Brown’s death.

The FBI’s Charlotte field office, which opened the probe, said in a statement that its agents planned to work closely with the Department of Justice "to determine whether federal laws were violated."

Brown's lawyers also welcomed the federal agency's involvement: "We have great faith that this caliber of an investigation will prevent any obscuring of the facts released to the Brown family and public and will overcome any local bias that may prevent justice from being served."