A federal judge rejected a plea deal for Travis McMichael. Wanda Cooper-Jones said she was upset to learn a plea was on the table.

ATLANTA - A federal judge rejected a plea deal that would have averted a hate crimes trial for Travis McMichael, who killed Ahmaud Arbery.

Arbery’s parents asked the judge to reject agreements filed for McMichael and his father, Greg McMichael.

U.S. District Judge Lisa Godbey Wood said it would have locked her into specific terms — including 30 years in federal prison — at sentencing. Wood said that in this case it would only be appropriate to consider the family’s wishes at sentencing, which the proposed deal wouldn’t allow.

Travis McMichael and his lawyer asked for a 10-minute break to discuss whether he moves ahead with pleading guilty. The judge had yet to rule on his father’s proposed deal.

Marcus Arbery told reporters outside the federal courthouse in Brunswick that he’s "mad as hell" over the deal, which lawyer Lee Merritt said could enable Travis and Greg McMichael to spend the first 30 years of their life sentences in federal prison, rather than state prison where conditions are tougher.

"Ahmaud is a kid you cannot replace," Arbery said. "He was killed racially and we want 100% justice, not no half justice."

Federal prosecutors thought it was important for them to get a confession, but Arbery's parents felt "betrayed." It appears the federal hate crimes trial will move forward.

Cooper-Jones described the U.S. Justice Department’s decision to propose the plea deal despite her objections as "disrespectful."

"I fought so hard to get these guys in the state prison," she said. "I told them very, very adamantly that I wanted them to go to state prison and do their time. ... Then I got up this morning and found out they had accepted this ridiculous plea."

Wood continued preparations to summon the first 50 potential jurors to the courthouse on Feb. 7 for questioning. 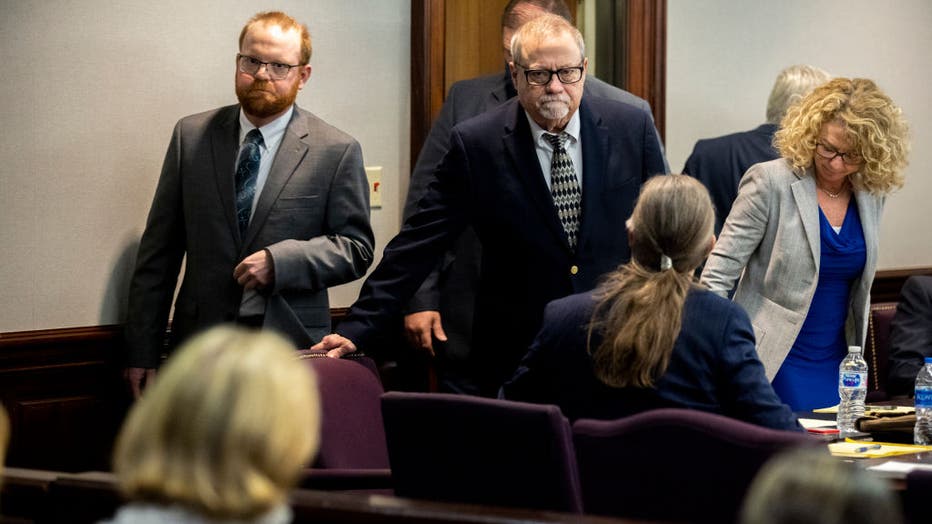 Greg McMichael, and his son, Travis McMichael look at family members seated in the gallery when they walk into the courtroom for the reading of the jury's verdict. (Photo by Stephen B. Morton-Pool/Getty Images)

The proposed plea agreements were filed with the court late Sunday. There was no mention of a deal with their co-defendant, William "Roddie" Bryan. Federal deals would not affect state murder convictions in Arbery’s killing. All three men were sentenced to life in prison on Jan. 7 after a trial last fall.

We respect the court’s decision to not accept the sentencing terms of the proposed plea and to continue the hearing until Friday.

"The Justice Department takes seriously its obligation to confer with the Arbery family and their lawyers both pursuant to the Crime Victim Rights Act and out of respect for the victim. Before signing the proposed agreement reflecting the defendants’ confessions to federal hate crimes charges, the Civil Rights Division consulted with the victims’ attorneys. The Justice Department entered the plea agreement only after the victims’ attorneys informed me that the family was not opposed to it."

The hate crime charges accuse McMichaels and Bryan of violating the 25-year-old Black man’s civil rights by chasing him through their neighborhood in coastal Georgia on Feb. 23, 2020. The McMichaels armed themselves and pursued Arbery in one pickup truck while Bryan joined the chase in another and recorded video of Travis McMichael blasting Arbery with a shotgun.

A national outcry erupted when the graphic video leaked online two months later. Georgia was one of just four U.S. states without a hate crimes law at the time. Legislators quickly approved one, but it came too late for state hate crime charges in Arbery’s killing.

Earlier in January, the McMichaels and Bryan were sentenced to life in prison. The McMichaels without parole, Bryan with it. All three were found guilty of murder last November after the jury didn't buy their citizen arrest defense.

Attorney Lee Merritt, who represents Arbery's mother, says the new plea deal will allow the McMichaels to serve the first 30 years of the term in federal prison, rather than a state one. Merritt says both of Arbery's parents are in his words "vehemently" opposed to the deal and are devastated the family's wishes are being ignored.

Arbery's mother, Wanda Cooper Jones, issued a statement saying the Department of Justice went "behind my back to offer the men who murdered my son a deal to make their time in prison easier." She went on to say that she has been "completely betrayed" by DOJ lawyers. Cooper plans on being in court to let the judge know that she opposed the plea agreement.

At this time there is no word of any possible agreement involving Bryan and federal prosecutors.