Affidavit: Deputy was in uniform when he returned items with damaged Home Depot store’s labels

Deputy Joseph Bobadilla and Sgt. Rebecca Evans are both charged with felony theft of property and are out of jail on bond.

They were both hired as off-duty officers to guard the Home Depot on Forest Lane in Dallas. It was severely damaged by an F-3 tornado in October.

According to an arrest warrant affidavit, Home Depot’s asset protection manager contacted the Dallas County Sheriff’s Office on Wednesday about the thefts and identified Bobadilla as the suspect.

Home Depot said on Oct. 31 Bobadilla asked a loss prevention officer if the store's security cameras were still working and inquired about what kind of items could be stolen from the store.

Then on Nov. 1 he was seen on surveillance video in full uniform exchanging a box of items “containing moisture” at the store on Wheatland Road. He was given $753.98 despite not having a receipt, the affidavit states.

The document states Bobadilla returned to the same store in uniform a few days later and made two returns worth $454.46 and $755.03 without a receipt. Those items also contained moisture and some had “Store 6503” marked on the label.

On Nov. 8, Bobadilla went to the Home Depot on Elam Road with a co-worker. He tried to return another $535.10 worth of items but was denied. His co-worker was also denied so they left the store.

On Nov. 11 the pair purchased a washer, dryer and microwave from Home Depot using store credit. They gave the address of two homes where the items should be delivered. 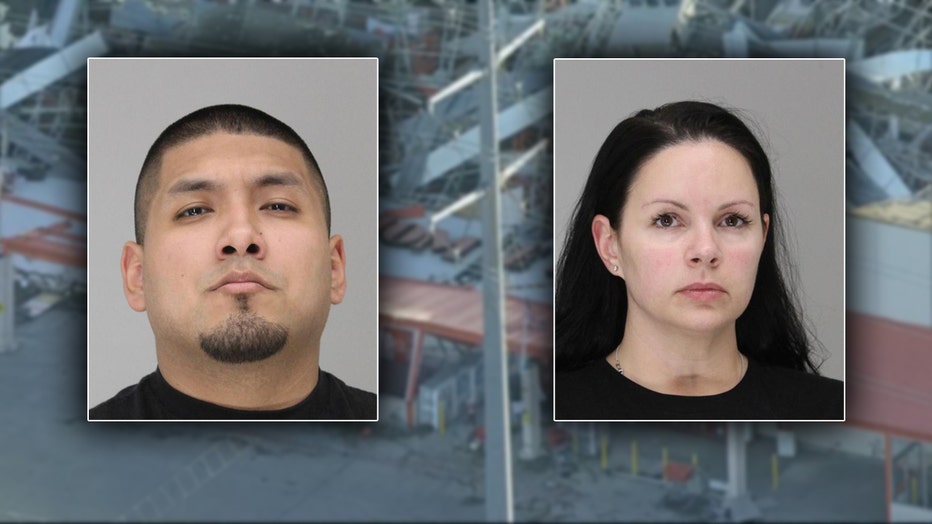 After the company contacted the DCSO, the affidavit states Bobadilla was brought in for questioning. He implicated Evans, his supervisor who also worked as an off-duty security officer at the damaged Home Depot.

Bobadilla told investigators Evans was the one who took all the items from the store. He claimed she took pictures with her cellphone, brought the items to her home and then brought them to work so that he could return them, the affidavit states.

The document states Bobadilla paid Evans $750 for her cut of the theft.

When Evans was brought in for questioning, she told investigators the plan was Bobadilla’s idea. She said he told her what to steal, the affidavit states.

Evans admitted to going into the damaged store three times and stealing items by concealing them under her uniform shirt. She corroborated with Bobadilla said about being paid $750.

Home Depot calculated a loss of nearly $2,500 from the theft.

Sheriff Merian Brown is angry about their alleged behavior.

“Anytime we see this happen not just with our agency but with any agency, this is a mark on the badge of law enforcement. And so any time it happens it affects all of us, not just in our department but all departments. Because it’s law enforcement as a whole that is being reflected upon,” she said. "I just hoped it was not going to be what it looked like on the face value but unfortunately it was."

Brown says her department will now look at other employees who worked security at the Forest Lane Home Depot.

There’s no word yet on if the other co-worker who tried to help Bobadilla return items at the Elam Road will face charges. The Dallas County Sheriff's Office said they are still investigating and there could be more arrests coming.