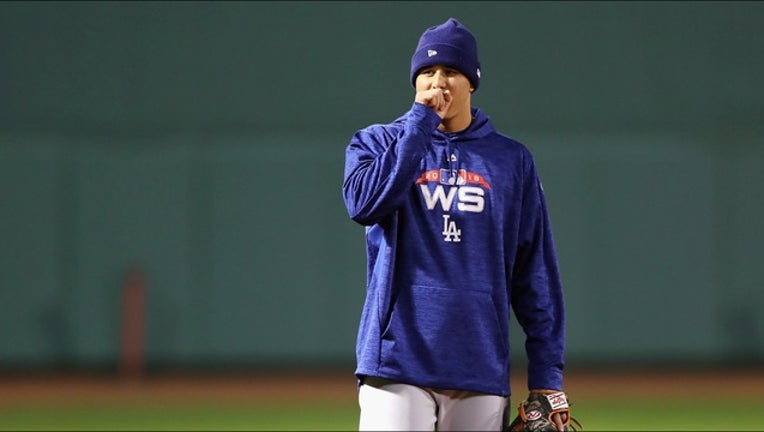 BOSTON, MA - OCTOBER 22: Manny Machado #8 of the Los Angeles Dodgers looks on during workouts ahead of the 2018 World Series against the Boston Red Sox at Fenway Park on October 22, 2018 in Boston, Massachusetts. (Photo by Elsa/Getty Images)

BOSTON (AP) - Hooting and hollering, Chris Taylor and a couple of Dodgers took aim at the Green Monster. With their arms, not bats.

Standing in left field, they kept throwing balls at a small, square space in the scoreboard, shouting every time a miss clanged off the metal letters.

"I've got good aim!" Taylor shouted after he finally tossed one through, ending the contest Monday.

A lot of fun for Los Angeles, frolicking at Fenway Park during a World Series workout.

Might not look, sound and feel so friendly come Game 1 on Tuesday night.

"It's a completely different atmosphere," Boston reliever Heath Hembree cautioned. "Are they going to feel the Monster breathing down on them?"

Goes beyond the ballpark, too.

"I think the biggest challenge for a team coming in here is you're playing the Boston Red Sox," pitcher Nathan Eovaldi said.

That's the part Clayton Kershaw will focus on, trying to contain Mookie Betts, J.D. Martinez and a team that blitzed to a team-record 108 wins, then breezed through the AL playoffs.

A three-time NL Cy Young Award winner, Kershaw has never pitched at Fenway. But he went through a drill in bullpen Sunday night, going through his entire routine on the mound - even going to his mouth and wiping his hand before taking the ball out of his glove - without throwing a single pitch. On Monday, he loosened up in a cutoff T-shirt and ski cap.

"Check this one off as far as pitching tomorrow, but I don't really think about the history part of it too much, honestly," he said.

The view from the other dugout certainly is more inviting.

"It's a lot better wearing the white uniforms," said Chris Sale, who starts the opener for Boston. "It's not an easy place to play as a visitor."

"This ballpark definitely brings its challenges in terms of it's different. It's not your standard wall out in center field, just kind of a half-oval. We have ... nooks and crannies and some sharp edges and some different things going on out there," he said. "I could definitely see how this could raise some challenges for a team that doesn't play here a lot."

Fans saw that earlier in the playoffs.

A relative stranger to the 37-foot-high wall, Yankees left fielder Andrew McCutchen misplayed a carom in the AL Division Series. Shortstop Didi Gregorius wandered far into the outfield, retrieved the carom and made a long relay - and wound up hurting his elbow, an injury that required Tommy John surgery.

During the AL Championship Series, Houston left fielder Marwin Gonzalez got lost out there and banged hard into the scoreboard, which isn't padded. He was down for a while.

"Crazy bounces, all the odd angles. Off the scoreboard, off the numbers," said Dodgers starter Rich Hill, who previously pitched for the Red Sox.

"Or you hook one down the line toward Pesky's Pole, it's probably less than 200 feet down there," he said. "There's not a park like this."

Taylor made a sensational catch in left-center field Saturday night as the Dodgers beat Milwaukee in Game 7 of the NLCS. He's played at Fenway, albeit a few years ago with Seattle.

The Red Sox and Dodgers are meeting in the World Series for the first time since 1916. The Dodgers haven't played an interleague game at Fenway since 2010, meaning Yasiel Puig, Cody Bellinger and Max Muncy will be getting their first looks on the field. Rookie Walker Buehler visited a couple times while he played in the amateur Cape Cod League.

Red Sox reliever Brandon Workman appreciates the oldest park in the majors, which opened about a week after the Titanic sank in 1912.

"There are some unique features here. The triangle in center field. The wall, of course," he said.

"I've never been in the visitors' clubhouse, but I hear it's tiny. That's OK by me, I'm on the other side."

At least the weather is supposed to decent enough. For late October in the Northeast, no doubt.

It's supposed to be around 50 for Sale's first pitch, with temperatures dropping into the upper 40s. A little cooler for Game 2 on Wednesday night when David Price starts for Boston against Hyun-Jin Ryu.

Before that, Dodgers second baseman Brian Dozier intends to speak to his teammates, sharing the knowledge he learned over seven seasons with Minnesota.

"There's no park similar to this," he said. "Balls down the line hit the stands. Flyballs can get lost. I guess my message is don't let yourself be surprised by anything that happens here."

Dodgers reliever Ryan Madson said he isn't too worried about the ballpark oddities. Easy for him to say - he was part of bullpens that won World Series championships in Philadelphia and Kansas City.

"None of that factors into what we're talking about," he said, adding with a smile, "we hope not."