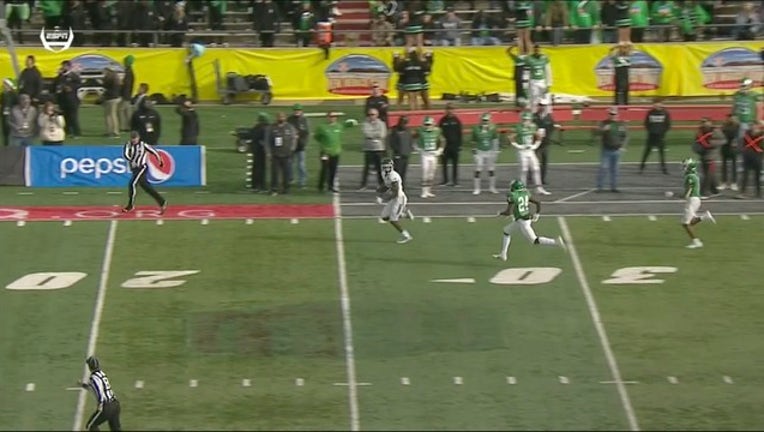 ALBUQUERQUE, N.M. (AP) - Jordan Love threw for 359 yards and four touchdowns and Jalen Greene had six catches for 151 yards and a score to help Utah State rout North Texas 52-13 in the New Mexico Bowl on Saturday.

Aaren Vaughns caught two passes for 109 yards and two scores for the Aggies, Gerold Bright ran for 103 yards and two touchdowns on 16 carries, and Darwin Thompson added 93 yards on 21 carries.

North Texas quarterback Mason Fine was injured in the first quarter, and the Mean Green ended up using four quarterbacks. Jalen Guyton had four catches for 103 yards a score.

UTAH STATE: Maile was tasked with preparing the Aggies with a staff of graduate assistants in coordinator spots. Players had to handle the distractions and constant questions over the future leadership of the Aggies and how it would affect their chances in the bowl game.

NORTH TEXAS: Coach Seth Littrell announced this week he would stay with the Mean Green to build on what he started when he took over a team that was 1-11 in 2015. Since then, he has a 23-17 but has yet to win a bowl game.

UTAH STATE: Gary Andersen returns to Utah State as head coach and takes over a program that is rising. Sophomore quarterback Love and junior running back Bright are returning to build on an offense that broke a school record in touchdowns.