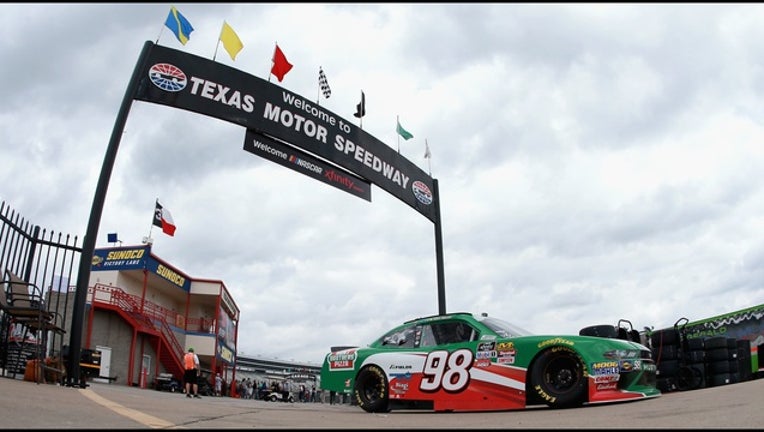 Kevin Harvick, driver of the #98 Hunt Brothers Pizza Ford, drives through the garage area during practice for the NASCAR Xfinity Series My Bariatric Solutions 300 at Texas Motor Speedway on April 6, 2018. (Photo by Sean Gardner/Getty Images)

FORT WORTH, Texas (AP) - Martin Truex Jr. and Kevin Harvick certainly know their way to the front at 1 1/2-mile tracks like the one at Texas Motor Speedway.

Reigning NASCAR Cup Series champion Truex has won five of the last eight races on 1 1/2-mile tracks since the middle of last season.

When Harvick was asked Friday if his team was at the point it can challenge Truex on such tracks, the Stewart-Haas driver responded: "That seems like a self-answering question."

That's because Harvick has won the other three in his Ford, including Texas last fall. He won at Atlanta and Las Vegas in the only two races on 1 1/2-mile tracks so far this year as part of his three-race winning streak.

"We are better than Truex," Harvick said.

After the Easter weekend break, the Cup schedule resumes with Sunday's race at Texas, where in November Harvick went around Truex for the lead with 10 laps to go and kept his Ford in front the rest of the way. That 1-2 finish locked both drivers into championship chase in the season finale at Homestead, another 1 1/2-mile track where Truex won.

Truex has led lap after lap at Texas, just never the last one. He has six straight top-10 finishes in the Lone Star State.

Before getting passed down the stretch last fall as Harvick went on to win for the first time in his 30 starts at Texas, Truex had led 107 laps in his Furniture Row Racing Toyota. Truex has led 363 laps in Texas the past two years, at least 49 in each of the four races in that span.

In the spring race five years ago in Texas, Kyle Busch regained the lead on pit road during a late caution and held on after the final restart to leave Truex as the runner-up after he had led 142 laps.

"For whatever reason, we've haven't been able to just put it all together, and this place has been tough to finally get that first win at," said Truex, who will make his 26th start at Texas this weekend. "I feel good going there."

Truex had five consecutive top-five finishes, including a win in California, before the first break of the season after what was a much busier-than-usual offseason as a first-time Cup champion.

"For sure, it's definitely been a good start to the year," Truex said. "Getting that first win out of the way it was big, I think, for all of us. Just kind of confirm that we're in a good place and the things we're working on and doing are working. ... This year, I think everybody's looking at us and trying to compare themselves to us, and knowing that we've been the car the beat, and I think that's an enviable position to be in."

Truex is currently second in points behind Kyle Busch.

Because of a 35th-place finish at California, Harvick is seventh in points even after winning half of the first six races. He rebounded before the break to finish fifth at Martinsville , where his Stewart-Haas teammate Clint Bowyer won to snap a 190-race winless streak that dated to 2012.

"Everything has gone fine and it all started, or a lot of it started, right here in the fall last year winning here for the first time and being able to get to victory lane and do the things that we did at the end of the year," Harvick said. "It is fun to be able to ride that momentum. You never know when it is going to shift the other way. The whole company is doing a great job."