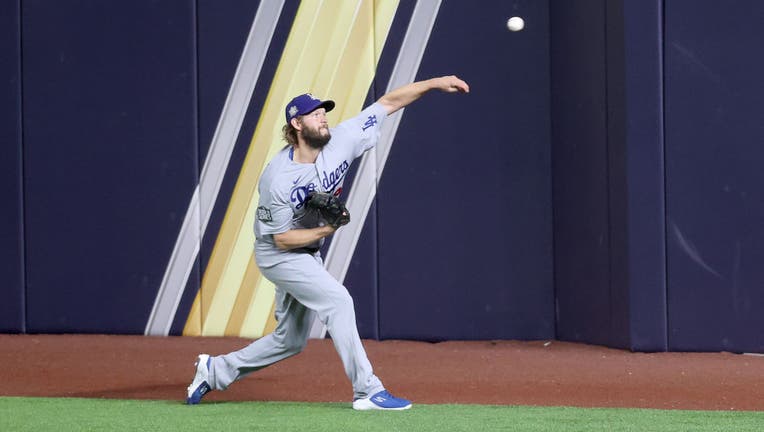 ARLINGTON, TEXAS - OCTOBER 25: Clayton Kershaw #22 of the Los Angeles Dodgers warms up prior to Game Five of the 2020 MLB World Series against the Tampa Bay Rays at Globe Life Field on October 25, 2020 in Arlington, Texas. (Photo by Tom Pennington/Ge

LOS ANGELES - The Los Angeles Dodgers bounced back in Game 5 after suffering a devastating loss to the Tampa Bay Rays the previous night.

This time, the Dodgers were able to hang onto their lead in the team's 4-2 victory over the Rays Sunday night.

The Dodgers jumped to a 2-0 lead in the first inning after RBI singles from Corey Seager and Cody Bellinger. Los Angeles then extended its lead to three runs after a solo home run from Joc Pederson in the second inning.

The Rays clawed back to trail 3-2 after Yandy Diaz hit an RBI triple, followed by an RBI single from Randy Arozarena in the third inning.

Dodgers' Clayton Kershaw escaped a jam in the bottom of the fourth inning after catching Manuel Margot trying to steal home.

Los Angeles' Max Muncy belted a moonshot of a solo homer to extend the Dodgers' lead to 4-2.

Kershaw, so far, is putting together a solid outing in his Game 5 start. The 3-time Cy Young winner has so far struck out six Rays batters, allowed two earned runs and two hits in five innings.

After a rocky relief appearance in Game 2, Dustin May regained his form Sunday night. May retired the first four Rays hitters in his Game 5 appearance in relief. The 23-year-old flamethrower was pulled from the mound after allowing his only hit to Rays' Kevin Kiermaier in the bottom of the eighth inning.

Victor Gonzalez and Blake Treinen were able to shut the door on the Rays hitters to keep the Dodgers' lead in the eighth and ninth innings.

The Dodgers take the field a day after losing Game 4 in one of the most frustrating ways possible. Los Angeles coughed up the lead three different times before allowing the Rays to score the winning run from an error from the Dodgers' Chris Taylor.

HOW THEY GOT HERE

The Dodgers punched their ticket to the World Series after overcoming a 3-1 series deficit against the Atlanta Braves in the National League Championship Series. Prior to that, the Boys in Blue swept their NL West rival, the San Diego Padres, in three games in the division series. The Dodgers also swept the Milwaukee Brewers in two games to secure a spot in the ALDS.

The Tampa Bay Rays captured the franchise’s second American League pennant after beating the Houston Astros in a winner-take-all Game 7 of the championship series. Prior to the ALCS, the Rays beat their hated rivals, the New York Yankees, in the division series. Tampa Bay swept the Toronto Blue Jays in two games to punch their ticket to the ALDS.

DID SOMEONE SAY FREE TACO?

Thanks to Dodgers star Mookie Betts stealing second base during Tuesday's Game 1, Americans everywhere can get a free taco from Taco Bell.

The giveaway is a part of Taco Bell's "Steal a Base, Steal a Taco" promotion for the 2020 World Series. After Betts swiped second during the fifth inning of the series opener, anyone can get a free Doritos Locos Taco from participating Taco Bell locations in the U.S.

Fans can take advantage of the offer on Wednesday, October 28 while supplies last, according to the fast-food giant's website.

RELATED: Taco Bell will deliver on their 'steal a base, steal a taco' promotion for World Series

You can catch the entire action on FOX 11.