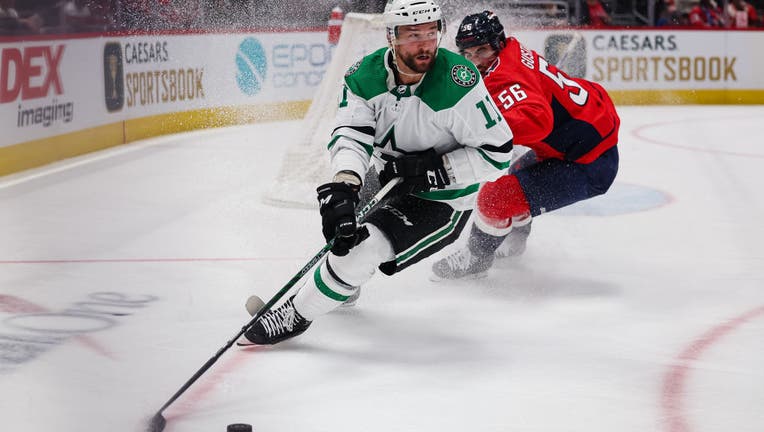 WASHINGTON, DC - DECEMBER 15: Luke Glendening #11 of the Dallas Stars skates with the puck as Erik Gustafsson #56 of the Washington Capitals defends during the third period of the game at Capital One Arena on December 15, 2022 in Washington, DC. (Pho

WASHINGTON - Coach Peter DeBoer told his Dallas Stars that Washington Capitals players were going to jump off the bench to celebrate the next two goals Alex Ovechkin scored. His goalie took that to heart.

Jake Oettinger made a season-high 45 saves to backstop the Stars to a 2-1 comeback victory over the Capitals on Thursday night, denying Ovechkin another milestone goal. Ovechkin will have to wait for No. 801, which would match Gordie Howe for second on the NHL career list.

"Obviously I don’t want that to happen — not against us," Oettinger said. "They can do that stuff another night. It’s always fun playing one of the best to ever do it, and it was a fun challenge and we stepped up."

Oettinger was Dallas' best player in turning aside five shots from Ovechkin and plenty of other quality scoring chances when Washington tilted the ice in his direction. Captain Jamie Benn tied it early in the third period, and defenseman Colin Miller scored the go-ahead goal on a fluky carom less than 90 seconds later to help the Stars win for the fourth time in five games.

"He played an incredible game, gave us a chance to win and probably should be all three stars tonight," Benn said of Oettinger. "Nothing’s really too big for him. I’m sure there was some pressure on him tonight, obviously, with Ovi’s chase there. He did an unbelievable job."

Washington's winning streak ended at five, and Ovechkin's run of four consecutive games with a goal came to an end.

"We’re trying to win games here," Capitals winger T.J. Oshie said. "Ovi’s gonna do it and we’re all going to be the first ones that congratulate him and be super, super proud of him, but we’re also in a little bit of a hole here. So, we’ll take care of his business and as a team we've got to focus on getting more wins here."

Ovechkin did get on the score sheet, setting up Conor Sheary's goal in the second period for his 645th assist. That pulled Ovechkin even with a different Hockey Hall of Famer, Bobby Orr, for 70th all-time in assists and generated a few faint "Ovi! Ovi" chants from fans in attendance looking to see a different kind of history.

Instead, they saw Washington lose on home ice for the first time in nearly a month. Charlie Lindgren stopped 24 of the 26 shots he faced in the end of his personal five-game win streak that earned him league First Star of the Week honors.

"I’ve just tried to go in and do my job," Lindgren said. "I just wanted to go in every night and give the team a chance to win. This team’s (played) extremely hard for me, a lot of credit goes to them. But, obviously, tonight not the way you want it to go."

A power-play goal by Benn 48 seconds into the third and Miller's shot 2:07 in that fluttered in off Capitals center Lars Eller's backside were enough to keep Dallas rolling on its five-game trip thanks to another strong performance by Oettinger, an early candidate for the Vezina Trophy as the league's top goaltender.

"He’s unflappable," DeBoer said. "He’s a special goalie, a special person. He’s got great leadership. He’s got great respect in our room. Guys play hard for him. Those are all the characteristics of an elite goalie that you need."

Stars: Visit the Carolina Hurricanes on Saturday night in the fourth stop of their road swing.