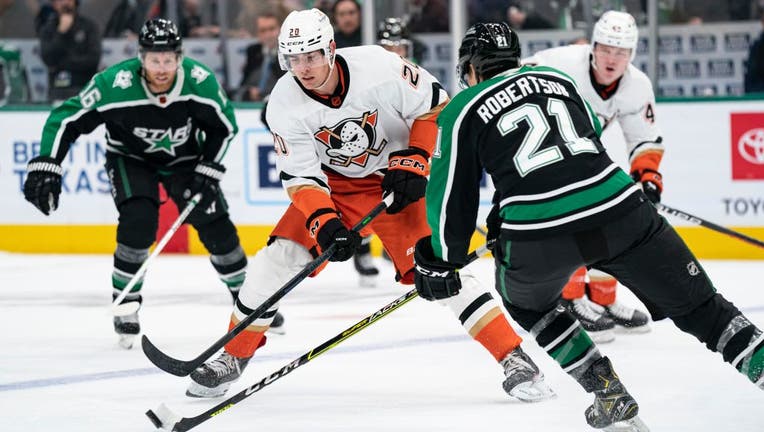 DALLAS, TEXAS - DECEMBER 01: Brett Leason #20 of the Anaheim Ducks skates with the puck in front of Jason Robertson #21 of the Dallas Stars during the second period at American Airlines Center on December 01, 2022 in Dallas, Texas. (Photo by Sam Hodd

DALLAS - Jason Robertson seemed to be downplaying his latest hat trick and the 17-game points streak he is on for the Dallas Stars, insisting several times that he is just playing hockey.

Well, the 23-year-old center is making that look so easy right now at the highest level.

Robertson scored in all three periods for his third career hat trick in the Stars’ 5-0 victory over the Anaheim Ducks on Thursday night.

"I’m just getting in position to shoot the puck, I mean, just got to get it past the first guy and get it on net," he said. "It was just playing hockey and picking my head up, and seeing what’s available. ... And it’s credit to guys who you don’t see on the scoresheet, the person who is screening the goalie."

Robertson became the NHL’s first 20-goal scorer this season with a deflected puck in the first period, then added his 21st and 22nd on long power-play goals in each of the next two periods.

"You kind get used to it, and you almost have to sit and think about it after about how special it is what you’re witnessing. It’s unbelievable," first-year Stars coach Pete DeBoer said. "He’s making it look easy."

Robertson's other hat tricks came in back-to-back games last March, when he was the first Dallas player to ever do that.

Joel Kiviranta and Wyatt Johnston also had goals for the Central Division-leading Stars. Jake Oettinger stopped 31 shots for his fourth career shutout, two nights after not playing in St. Louis because of an illness.

"He was quiet, he was composed. And there were some tough saves early, especially on their power play," DeBoer said of his goalie.

It was the fourth time in six games for Robertson to have multiple goals. His points streak began Oct. 27 and was already the longest for the team since moving from Minnesota to Dallas in 1993. The franchise record of 20 was set by Brian Bellows in 1986.

Miro Heiskanen had three assists for Dallas, which opened a five-game homestand. Roope Hintz had helpers on two of Robertson's goals in his first game since signing an $67.6 million contract extension.

Anthony Stolarz had 36 saves for the Ducks.

"We were kind of settled in, but as soon as it went to (2-0), for some reason, we wanted to change our game plan," said coach Dallas Eakins, whose Ducks played the second of four consecutive road games.

Robertson, who last season became the only the team's fourth 40-goal scorer in Dallas, missed the most of preseason camp before signing a $31 million, four-year contract a week before the season opener.

After being named earlier in the day as the NHL's first star for the month of November, Robertson need just more than four minutes in the first game of December to extend his points streak.

He moved the puck behind the net and sent a short wrister from the side into the crease. The puck went off the stick of a Ducks defender and past Stolarz.

Robertson scored from the slot just above the circles in the second period, and from the top of the right circle in the third. He has 20 goals and 12 assists in his points streak.

NOTES: Dallas has won nine home games in a row against the Ducks since the 2015-16 season. ... Ducks defenseman John Klingberg, who went to Anaheim in free agency last summer, wasn't with the team in Dallas, where he played the past eight seasons. He missed his fourth game in a row with a lower body injury.

The next game for both teams is against Minnesota. Anaheim plays the third of its four consecutive road games Saturday against the Wild, who will then play in Dallas on Sunday.