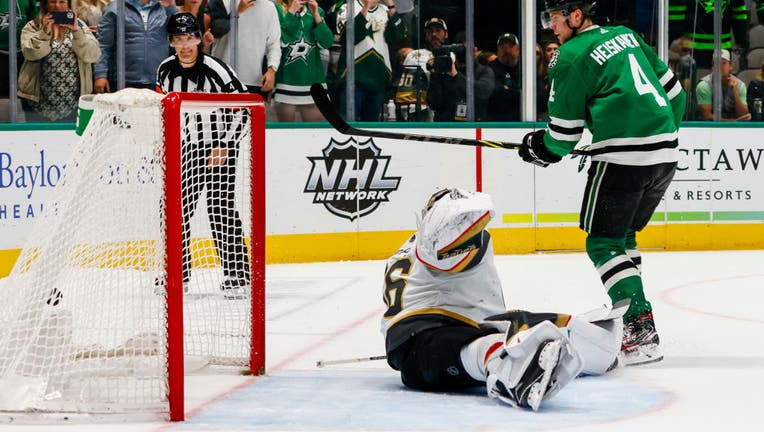 DALLAS, TX - APRIL 26: Dallas Stars defenseman Miro Heiskanen (4) shoots the puck and scores the winning goal in the shoot-out against Vegas Golden Knights goaltender Logan Thompson (36) during the game between the Dallas Stars and the Vegas Golden K

DALLAS - Miro Heiskanen made the only shot in a seven-round shootout after Jason Robertson scored twice to reach the 40-goal mark, and the Dallas Stars are on the verge of finally clinching a playoff spot.

The Vegas Golden Knights aren't done yet, but are close to missing the postseason for the first time in their brief franchise history.

Jake Oettinger, who had 33 saves through overtime, made one last stop in the shootout after Heiskanen's back-handed tally as the Stars got a 3-2 victory over Vegas on Tuesday night.

"We taught him a lot by practicing on him," Stars center Tyler Seguin said of the young goalie. "He’s worked hard at shootouts and you know how good he’s gotten at them. That’s all from his determination and practice, and it was huge for us."

With Nashville claiming one of the Western Conference's two wild-card spots despite its overtime loss at home Tuesday, that leaves one spot for either the Stars or Golden Knights. Dallas and Nashville both have 95 points, but the Predators hold all tiebreakers over Dallas and Vegas (91 points).

"We’ve still got a pulse. We’re not eliminated," Vegas coach Peter DeBoer said. "I’m proud of our group. They came in and played one hell of a road game. We got the lead, it was up again, had some chances to win the game and we just didn’t finish. You have to give their goalie some credit."

Vegas made the Stanley Cup Final in its inaugural season in 2017-18 and has been in the playoffs the past three seasons.

"Yeah it’s a dream come true, those are the opportunities that you want as a professional athlete, to be able to step up for the guys that are in the room," Oettinger said.

Logan Thompson had 28 saves, with a glove stop of his own when Roope Hintz drove hard and ripped a shot with 3:08 left in overtime. Thompson was briefly shaken up about a minute later when Vladislav Namestnikov slid through the crease, knocking the goalie down and dislodging the net.

"I have the luxury of having elite players around me," Robertson said. "I’m just trying to play hockey, and definitely couldn’t have got there without (teammates) setting me up."

Robertson got his 39th goal in the second period when he weaved through the circle, going right to left to set up a low forehand shot over Thompson’s glove and just inside the post to the goalie’s right.

Vegas took a 2-1 lead on Chandler Stephenson's power-play goal with only two seconds left in the second period.

Oettinger was out of the crease to the right of the net after making a pad save with his extended leg when Stephenson, only a few seconds after missing a shot, knocked the ricocheted puck into the open net past defenseman Esa Lindell's desperate sliding attempt to prevent Stephenson's 21st goal of the season.

The Golden Knights were coming off a 5-4 shootout loss to San Jose in their regular-season home finale Sunday night, when they squandered a two-goal lead in the final 2:06 of regulation and got one point instead of two. They play at Chicago on Wednesday night.

"It’s not perfect back-to-back. But we really don’t have a choice," DeBoer said. "We’ve got to find a way to reenergize here and win a game tomorrow."

Stars: Dallas is 2-1 against the Coyotes this season, but lost 3-1 in the most recent meeting Feb. 20.