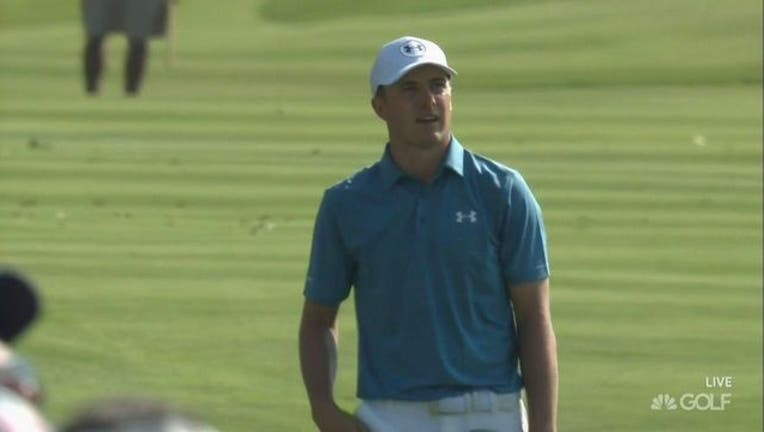 AUSTIN, Texas (AP) - Jordan Spieth and Patrick Reed enjoy few things more than trying to beat each other, and that's when they are partners. The stakes are even higher in the Dell Technologies Match Play.

Spieth and Reed did their part Thursday by winning their matches for a second straight day to set up a showdown on the skirts of Hill Country in Texas. They play Friday to determine who wins the group and advances to the weekend of this World Golf Championship.

Reed fired the first shot when asked what made Spieth a good opponent in match play.

"I don't know. My back still hurts from the last Ryder Cup," he said with a laugh, alluding to the way he carried Spieth in their partnership at Hazeltine to a 2-1-1 record in team play during a rare American victory.

Spieth dodged trouble early against Li Haotong, who missed putts inside 8 feet on two of the opening three holes, won the second hole when Spieth hit into the hazard and thought he won the fourth hole until Spieth matched his birdie by chipping in from short of the green.

Spieth never trailed and pulled away with a savvy play on the par-4 13th over the water and into the wind. He hit driver well to the right toward the gallery, which gave him a clear look at the green without having to hit over any of the lake. His pitch-and-run settled a foot away for birdie and a 2-up lead, and Spieth closed him out, 4 and 2.

Right behind was Reed in his match against Charl Schwartzel, and the South African was 2 up at the turn until Reed won the next two holes to set up a tight finish. Schwartzel stayed 1 down when he missed a 5-foot par putt on the 17th. Needing a birdie on the 18th to halve, Schwartzel could only watch as Reed hit a wedge that nearly went in and stopped a few inches away.

Reed and Spieth are 7-2-2 as partners in the Presidents Cup and Ryder Cup. They are 1-1 in PGA Tour playoffs, with Reed hitting through the greens to short birdie range when he won the Wyndham Championship in 2013, and Spieth returning the favor in 2015 at Innisbrook by winning a playoff with a 30-foot putt.

They don't have much of a relationship except in team competitions, and even then it's unusual.

"Because we're so competitive with each other within our own pairing at the Ryder Cup, we want to outdo each other. That's what makes us successful," Spieth said. "Tiger says it's a phenomenon. It's not something that he's used to seeing in those team events. Normally you're working together. But we want to beat each other every time. In alternate shot, if we don't win a hole, I want it to be his fault and he wants it to be my fault.

"We've almost played every single match we've been involved in together against each other," he said. "We just happen to be wearing the same colors."

Reed and Spieth have advanced out of group play just once, both in 2016 at Austin Country Club, and both lost fourth-round matches.

"He's not going to give you holes," Reed said. "You have to go and play some good golf. And that's what it's going to down to. Because I plan on not giving him any holes."

That isn't the only match between undefeated players this week.

Alex Noren of Sweden had another easy time, beating Thomas Pieters in 14 holes, and won for the sixth time in his last seven matches. He faces Tony Finau, who dispatched of Kevin Na to win his second straight match.

Defending champion Dustin Johnson will effectively play a practice round Friday. A year after the world's No. 1 player couldn't be beaten, Johnson couldn't beat anybody. He lost to Bernd Wiesberger on Wednesday, and fell behind early in a 4-and-3 loss to Adam Hadwin on Thursday.

McIlroy had an easy time beating Jhonattan Vegas, while Brian Harman knocked out Peter Uihlein in the other match in their group. Harman will win the group if he beats McIlroy on Friday; McIlroy has to win to have any chance of making it to the weekend.

"At least I've given myself a chance to progress," he said.

Mickelson, who lost to Charles Howell III in the opening round, rallied from 4 down after eight holes and won the last three holes to beat Satoshi Kodaira. Mickelson still needs Howell, who won against on Thursday, to lose a match.