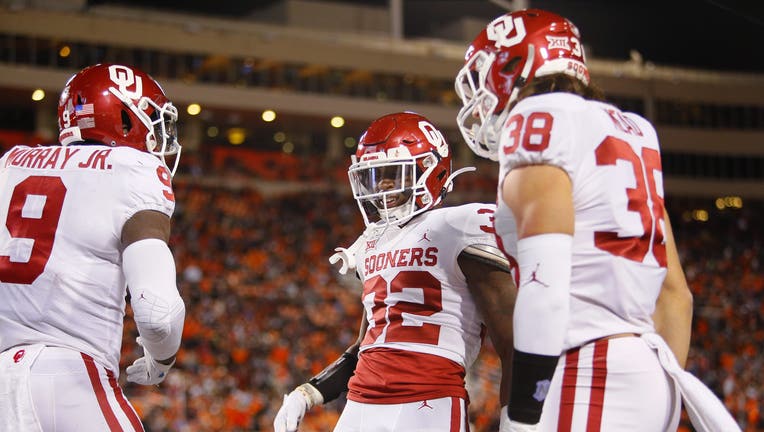 Safety Delarrin Turner-Yell #32, linebacker Kenneth Murray #9, and linebacker Bryan Mead #38 of the Oklahoma Sooners celebrate after stopping the Oklahoma State Cowboys with no gain on fourth and one in the fourth quarter on November 30, 2019 at Boon

ATLANTA - Oklahoma linebacker Kenneth Murray knows the Sooners' defense is preparing for its toughest challenge of the season and believes experience on the national stage will be a big factor.

No. 1 LSU (13-0) enters the College Football Playoff semifinal in Saturday's Peach Bowl leading the nation in yards per game and red-zone production. The Tigers are the first Southeastern Conference team with a 4,000-yard passer — Heisman Trophy winner Joe Burrow — a 1,200-yard rusher and two 1,000-yard receivers.

Murray is confident, though, that No. 4 Oklahoma (12-1) has plenty of momentum as the Big 12 champion, and the Sooners are familiar with this setting after making it to football's final four for the third straight year and the fourth time in five seasons.

LSU's offensive line is arguably the nation's best, but if the Tigers have an occasional weakness up front, it's in pass protection. LSU ranks 77th in average sacks allowed, and Burrow went down 28 times after getting sacked 35 times last season.

But Oklahoma must knock off the Tigers without two of its top players. Sacks leader Ronnie Perkins is suspended for the game, and strong safety Delarrin Turner-Yell, second on the team in tackles, broke his collarbone in practice last week. Then there is starting nickel back Brendan Radley-Hiles, whose status is uncertain with a head injury.

The Sooners are no stranger to overcoming injuries this season.

Still, replacing Perkins will be tought. His primary backup, Marcus Stripling, has one sack in 13 games, so one possible replacement could be Jalen Redmond, who shares a tackle spot with LaRon Stokes but played end last season. His 5.5 sacks this year are second on the team, and he had 1.5 in the Big 12 championship victory over Baylor.

First-year defensive coordinator Alex Grinch has grown accustomed to filling in the gaps, so he expects other players to step up and play well.

“It's kind of been part of our story in 2019," Grinch said of the injuries. “But we stick to what we do defensively. We feel like what we ask these guys to do on a week-to-week basis, regardless of opponent, puts them in the situation to be successful."

The setbacks have hampered the Sooners, but LSU offensive coordinator Steve Ensminger still sees plenty of talent on the opposing side.

“This might be the fastest defense we face," Ensminger said. “They can run. Their defensive line can run, their linebackers can run, their secondary can run. They present problems with their speed. And so it's protection first. You got to be able to run the football against this team. Nobody has. You put up explosive runs on tape, and they're not very many of them, so it's got to be a good mixture."

The Sooners' quickness will affect his play selection, too.

“I think you have to be a little bit faster with this defense as far as calling plays and getting it in and let's go," Ensminger said. “It will be a challenge."

Oklahoma has made considerable improvement under Grinch, moving from 119th to ninth nationally in third-down percentage, from 57th to 11th in tackles for a loss and up 90 spots to 24th in total yards.

Speed is the key, and Murray moves quickly. His 155 tackles ranked second in the Big 12 and were the most by a Sooner since Curtis Lofton in 2007.

The players up front like to bring it, too.

“It's one thing when your fast guys are doing it, but even being a D-lineman, it's a sense of pride that comes into playing at a high level consistency," said nose guard Neville Gallimore, adding “that “and that goes back to coach Grinch and all the defensive coaches just kind of instilling that that's not just something you do. It's a requirement."