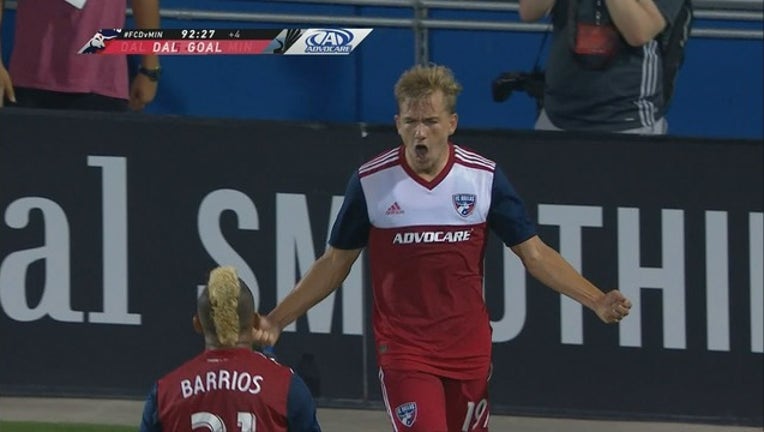 Servania came on in the 75th minute and scored his first MLS goal in the 85th with a sliding finish from point-blank range of a cross by Barrios. The 20-year-old homegrown making his 10th career appearance then capped the scoring with a side-footer from the top of the 6-yard box in the third minute of stoppage time.

Minnesota United (11-8-5) had a seven-game unbeaten streak snapped. It lost for the first time since a 1-0 loss to Colorado on June 8.

Minnesota's Ethan Finlay blasted a volley from point-blank range past goalkeeper Jesse González to make it 1-0 in the 11th minute, but Ryan Hollingshead scored on a rising left-footer in the 28th and Santiago Mosquera banged a high shot from the right flank off the far post and into the net in the 32nd to give FC Dallas a 2-1 lead.

Finlay chest-trapped an arcing pass by Collin Martin then chipped a volley into the net from the top of the box to tie it in the 41st minute, but Reggie Cannon gave FC Dallas (10-9-6) a 3-2 lead in the 45th minute. Michael Barrios threaded a pass through a pair of defenders to a charging Cannon, who slipped a shot between the legs of goalkeeper Vito Mannone into the net.

Hassani Dotson slipped through a pair of defenders, cut back to evade another and then blasted a side-netter from outside the box to make it 3-3 in the 73rd minute.