ROCKWALL, TX - It all started one day in eighth grade, with a track coach needing someone to do the high jump.

There was Claire Lowrey – tall, athletic and one leap away from discovering a life-changing talent.

"The first day I was already jumping with the boys," remembers Claire, now a junior at Rockwall High School. "[Coach] was like, ‘I think I found something.’ Whenever you find something you’re good at you want to continue to do it and it was exciting because it was the first time I was extraordinary at something."

Three years later, Lowrey has committed to trying to become the most legendary jumper she can.

"Some athletes will walk out there and they’re just good at it," says Toby Howell, jump coach at Rockwall High School. "[Claire] put in a lot of work to be as good as she is now."

On March 26th, Lowrey - who stands 5-11-– cleared a six-foot jump. So far this season, that’s the best mark for any high school girl in the nation.

"In my brain I kind of was like, ‘Oh wow,’" said Lowrey. "I just couldn’t believe it, this isn’t real life. I thought I’d hit six-foot in college, I never thought I’d do it in high school."

The best jump by a high school girl in Texas history belongs to five-time Olympian Amy Acuff, who leaped 6-4 back in 1993. Now Lowrey is eyeing her record.

"If you would have told me this like a week ago I would’ve just laughed and said, "Oh no way, never,’" says Lowrey about challenging Acuff’s record. "But I truly think anything’s possible now."

Howell is a believer, too.

"I don’t think 6-4 is out of the realm of possibility before she graduates," says Howell. "It’s just putting in the work. Putting in the time. We know what it takes."

There’s no telling how much higher Claire Lowrey can raise the bar.

Winning titles, breaking records, making the Olympics – those realities all seem with her reach.

And yet sometimes, this whole thing still feels totally unreal to the girl who just out-jumped her own height.

"Like sometimes I think to myself, ‘OK Claire, this is you,’ whenever I watch the video," says Lowrey, who placed third at the state meet in high jump as a sophomore. "I’m like, ‘This is you jumping that.’ And then other times I’m like, ‘That’s not me! That can’t be!’"

"It’s just such an unreal, unreal feeling to feel number one." 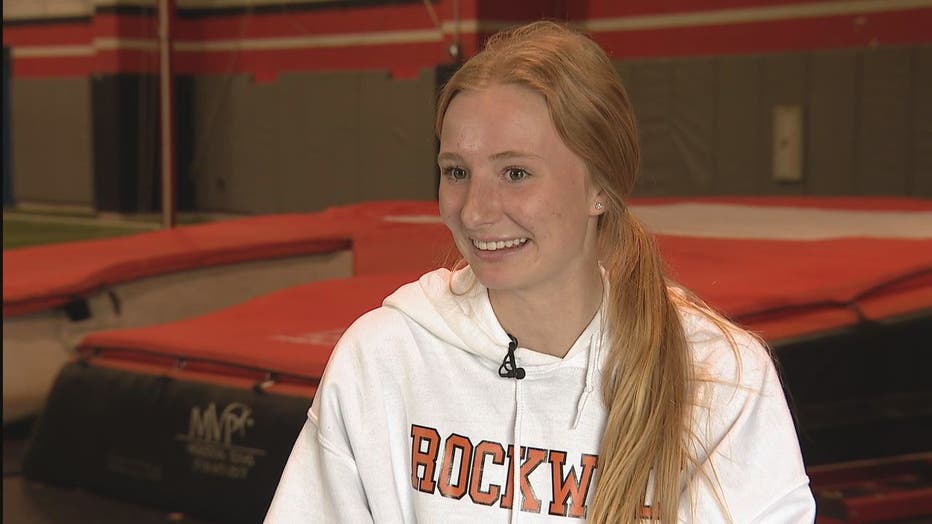 Claire Lowrey is chasing down major records as a high jumper at Rockwall High School.