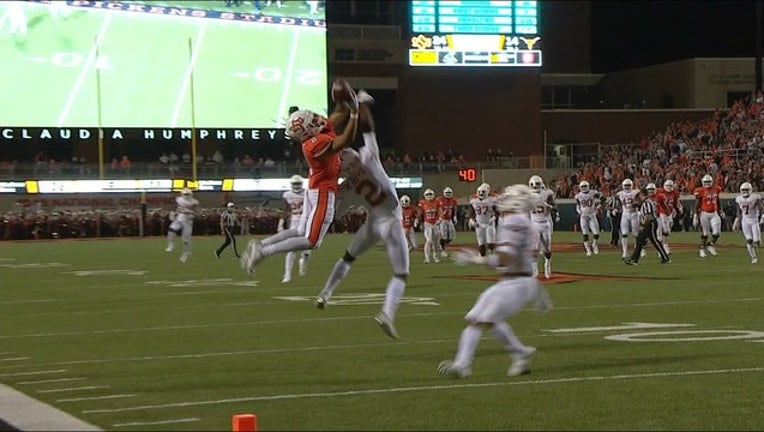 No. 22 Syracuse and No. 23 Virginia broke long runs of being unranked and were among a record seven teams to move into The Associated Press college football poll after a season-high 11 ranked teams lost this weekend.

The top of the ranking was mostly unchanged. No. 1 Alabama, No. 4 LSU and No. 5 Michigan were idle and unchanged . No. 2 Clemson and No. 3 Notre Dame won easily.

The College Football Playoff selection committee releases its first ranking of the season on Tuesday.

The Orange had the second-longest streak of unranked seasons among Power Five schools, behind only Indiana. The Hoosiers have not been ranked since 1994. The Cavaliers were tied for sixth on that list with Illinois.

With those teams now ranked, here are the current longest droughts in the AP Top 25:

The other teams making their season debut in the Top 25 came from outside the Power Five conferences:

Re-entering the rankings were:

- No. 21 Mississippi State , which has been yo-yoing in and out of the bottom of the Top 25 for much of the season.

- No. 24 Boston College after beating Miami on Friday night.

Over the last 10 years, on average, a little less than two teams that start the season ranked in the AP top 10 finish the season unranked. There are currently four preseason top-10 teams out of the poll.

Washington and Wisconsin became the latest. The Huskies were No. 15 last week but lost to California 12-10. They started the season No. 6. The Badgers, No. 4 in the preseason poll, fell 31-17 at Northwestern.

Also on the outside of the rankings after starting the season with lofty expectations are Miami (preseason No. 8) and Auburn (preseason No. 9). The last time four preseason top-10 teams finished unranked was 2002, when Tennessee (preseason No. 5), Florida (No. 6), Washington (No. 9) and Nebraska (No. 10) flopped.

The other dropouts this week were Oregon, South Florida, North Carolina State, Stanford and Appalachian State.

No. 15 Texas was the highest ranked of the eight ranked teams to lose to unranked teams, and the Longhorns had the week's biggest drop. Texas fell nine spots from No. 6 after losing at Oklahoma State.

No. 10 Washington State moved up four spots after rallying to win at Stanford. The Cougars and No. 16 Utah are the Pac-12's only ranked teams this week, and neither was ranked in the preseason.

Week 10 of the college football season has the potential to be the best and most meaningful yet.

No. 1 Alabama at No. 4 LSU. The Crimson Tide can clinch the SEC West.

No. 14 Penn State at No. 5 Michigan. The Wolverines' last big hurdle before No. 8 Ohio State in the regular-season finale.

No. 6 Georgia at No. 11 Kentucky. The Breeders' Cup will take a back seat to the game that will decide the SEC East.