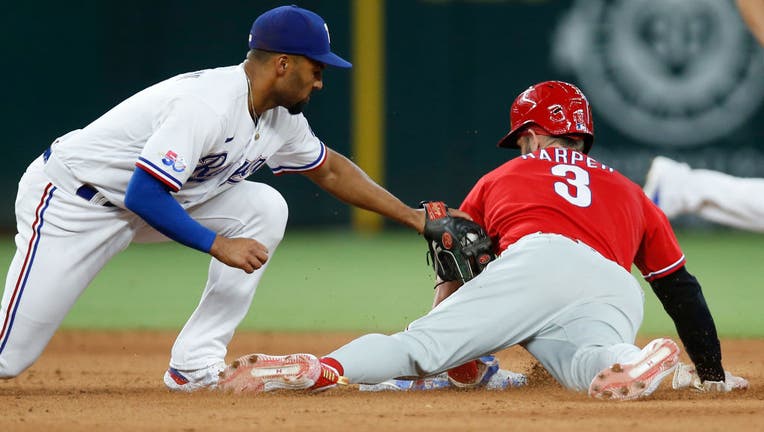 ARLINGTON, TEXAS - JUNE 22: Bryce Harper #3 of the Philadelphia Phillies steals second base as Marcus Semien #2 of the Texas Rangers applies the tag in the sixth inning at Globe Life Field on June 22, 2022 in Arlington, Texas. (Photo by Tim Heitman/G

ARLINGTON, Texas - While the Texas Rangers struck out 14 times overall, they made Zack Wheeler throw a lot of pitches, took advantage of an error and beat the Philadelphia Phillies again.

"I was just proud of our offense today, making Wheeler throw a ton of pitches, working a lot of counts," Rangers manager Chris Woodward said. "Obviously he punched out a lot of guys and we struck out 14 times. But at the same time, we actually had really quality at-bats to get those runs."

Wheeler (6-4) lost for the first time in his last 10 starts, since losing his first three starts this season after finishing second in the NL Cy Young Award voting last year. The right-hander struck out eight, but walked three and gave up four runs (two earned) on seven hits on 99 pitches over 4 1/3 innings.

Jon Gray (3-3), the opening day starter for Texas, has won consecutive starts for the first time this season. The right-hander struck out six and walked one while allowing two runs and four hits over 5 2/3 innings.

Joe Barlow, the third Texas reliever, worked the ninth for his 13th save in 15 chances.

The Rangers led 2-0 on Miller’s single that came a few batters after a fielding error by first baseman Rhys Hoskins, and before Wheeler recorded his fifth strikeout already to get out of that inning. Josh Smith raced home from first base for the second run on a ball that was grounded not hard into the outfield.

"I almost checked up a little bit," said Smith, who then saw third base coach Tony Beasley waving him home.

Miller had only one hit in his previous 17 at-bats before then. The designated hitter played part of 2019 in Philadelphia, and all of last season there before signing a two-year deal with Texas.

While that play fired up Woodward, a former third base coach, Phillies interim manager Rob Thomson said Smith likely would have been held at third base had center fielder Odubel Herrera fielded the ball instead of letting right fielder Nick Castellanos do so with his momentum going away from the infield.

"I talked to Odubel about it," Thomson said.

That inning could have been even bigger for the Rangers, who left the bases loaded after Wheeler went to full counts on three consecutive batters. The first batter to a full count was Jonah Heim, who walked on a checked swing on a play when it appeared Calhoun had been thrown out trying to steal second base. Instead of that potential inning-ending double play, Wheeler had to throw 20 more pitches to get out of the inning.

"I think that’s what it was," Wheeler said when asked if he felt Heim offered at strike three. "I’ve just got to go on after that, and just cut down the inning quicker. ... My command was off, just felt a little off in general."

Philadelphia has lost three games in a row after winning 14 of its first 16 games under Thomson, who replaced the fired Joe Girardi.

"You've got to take the same approach we took in the first 16 games," Thomson said. "Just prepare and compete and bring energy every day and and lay it out there because this is a good ballclub."

Schwarber's homer to straightaway center was his 19th this season. It was his ninth homer in the on-base streak since May 26, a span when he also has 24 runs, 23 walks and 29 strikeouts. ... Bryce Harper returned to the Phillies lineup after missing three games with an infected blister on his left index finger. He was 1 for 3 with a single and a walk. He has reached base in 21 consecutive road games since May 1, with hits in all but one of those.

Phillies: RHP Zach Eflin, limited in his last start because of a bruised right knee, threw a bullpen session. He is still scheduled to start Saturday in San Diego.

Rangers: Rookie right-hander Glenn Otto could return to the Rangers rotation this weekend after being on the COVID-19-related injury list since June 11. He made a rehab start for Triple-A Round Rock on Tuesday night.

Phillies: Their 10-game road trip continues with the opener of a four-game series Thursday night at San Diego against right-hander Joe Musgrove (8-0, 1.59 ERA).

Rangers: After an off day between two home series for the first time since a week into the season, the Rangers open a three-game series Friday night against Harper's former team, the Washington Nationals.