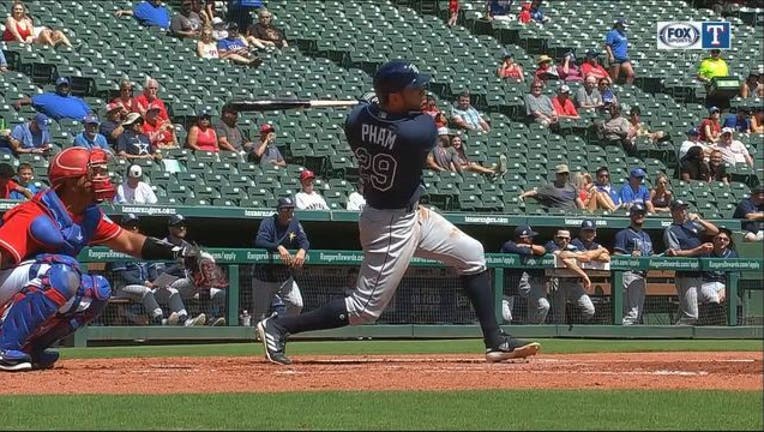 ARLINGTON, Texas (AP) - Before slipping into the baby costume that was part of rookie dress-up travel day for the late-surging Tampa Bay Rays, Ryan Yarbrough broke a record that had stood since the team's first season 20 years ago.

And Tommy Pham homered twice for the still playoff-hopeful Rays in another win for another sweep.

A day after Blake Snell became the majors' first 20-game winner in two years, the Rays used an "opener" for the 49th time this season. Yarbrough, the second of five pitchers, struck out six in four innings for his 15th victory as Tampa Bay completed a three-game sweep with a 9-3 win at Texas on Wednesday.

"There's a lot that he's doing right, that's pretty awesome," manager Kevin Cash said of Yarbrough (15-5), who has started only six of his 36 games and broke the Rays' rookie record for wins that had stood since their inaugural season in 1998.

"H's earned those. You've got to come in and you've got to pitch well to get a 'W' more times than not, and he's done that," Cash said. "Whether he's started games or coming in after an opener, he's really taking advantage of that role that we've asked him to pitch in."

The Rays (85-66), who have won 14 of their 17 games in September and have 11 remaining, entered the day 5½ games behind Oakland for the American League's second wild card despite a record that would lead or share the lead in three divisions in baseball. But they are third in the AL East behind the Boston Red Sox and New York Yankees.

"It's really easy to look too much at the bigger picture," said Matt Duffy, who had a two-run double. "In order to take care of win after win, and game after game, you have to focus on what's right in front of you."

Going into the finale against the Rangers, Tampa Bay's record was the same as AL Central champion Detroit's, and better than NL East leader Atlanta's and the NL West-leading Los Angeles Dodgers'.

Jake Bauers had a two-run single and scored on Willy Adames' single in the second off lefty Yohander Mendez (2-2) to put the Rays ahead to stay at 3-0. Pham hit his 18th homer leading off the third, and Duffy's double in the fourth made it 8-1.

Pham went deep again in the eighth for his seventh career multihomer game, off 45-year-old Bartolo Colon, who was pitching in relief. It was Colon's first appearance since his last start on Sept. 5.

"I play this game to win, and I play it to have success," said Pham, whose career-best 21-game on-base streak is the longest active in the AL. "That's what's been going on here. When you have that combination in the locker room, it's always going to be good."

Adrian Beltre hit his 13th homer of the season for the Rangers. It was the 475th of his career, matching Stan Musial and Willie Stargell for 30th on the all-time list.

"I should be proud of that, and I am proud of that," Beltre said. "Any time that you make a list with those guys' names, you have accomplished something."

The Rays clinched their fourth sweep in nine series since Aug. 20, and their 12th series sweep of the season matched a club record. Tampa Bay has also won five consecutive games, the seventh time this season it won at least that many games in a row.

Tampa Bay posted shutout victories in the first two games of the series. The Rangers ended a season-long scoreless drought of 23 innings in the third when Carlos Tocci singled and scored on Elvis Andrus' two-out single.

Rays: C Jesus Sucre started but didn't finish the game. He has a sore left foot after fouling a ball off it Tuesday. "We'll probably rest him for a day or two and see how he responds," Cash said.

Rangers: Relievers Matt Bush (partial tear of UCL in right elbow) and Austin Bibens-Dirkx (torn cartilage right knee) had surgery Wednesday. Busch will miss the first half of the 2019 season. Bibens-Dirkx is expected to be ready for spring training.

Rangers: After their last scheduled off day of the season Thursday, the Rangers open their final home series against Seattle on Friday night.