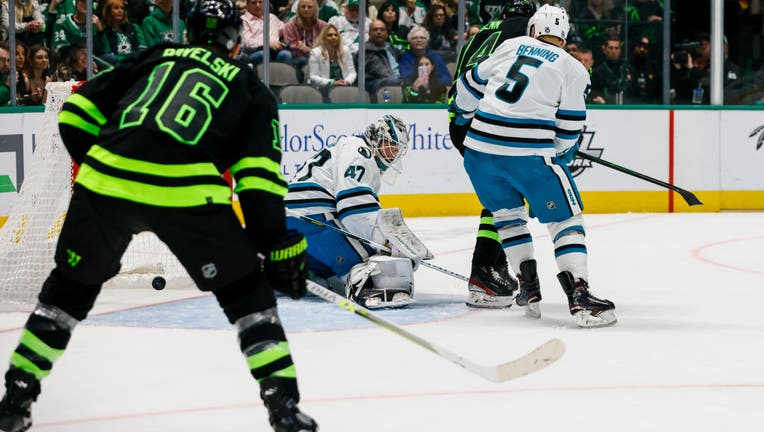 Joe Pavelski had a goal and two assists, and Jason Robertson had a goal and an assist for the Stars, who ran their winning streak to a season-best four games. Jake Oettinger, who made 28 saves, recorded all four wins. Roope Hintz had a short-handed goal with 4:42 to play, and Esa Lindell scored into an empty net with 1:13 left.

Olofsson, playing in his third game and first at home, redirected a pass from Pavelski while charging through the slot, scoring at 10:45 of the second period. That goal came 1:42 after San Jose tied the score at 2.

"You really can’t describe it," said the 26-year-old wing who was recalled from Texas of the AHL on Tuesday. "It’s an unbelievable pass. I’m at the end of my shift, and ‘Pavs’ finds me there. I mean, it feels great."

San Jose’s Erik Karlsson, who leads NHL defensemen with 51 points, extended his point streak to 12 games – every game the Sharks played in December – to tie a franchise record.

Alexander Barabanov and Oskar Lindblom scored and James Reimer stopped 26 shots for the Sharks, who have lost three straight (0-2-1) and six of their last seven (1-4-2).

Pavelski, who played 13 seasons for the Sharks before signing with Dallas in July 2019, and Robertson scored power-play goals 2:12 apart midway through the first period, erasing a 1-0 Sharks lead.

"Obviously, the power play gets a couple of goals, but the penalty kill was big," said Pavelski, who has three goals and seven points in six games against San Jose.

"I liked our game tonight 5 on 5 for sure," first-year Sharks coach David Quinn said. "I thought we played a good hockey game, but special teams let us down. Our power play had opportunities to make a difference and unfortunately at a key time (trailing by one with six minutes left) ends up giving up a short-handed goal."

Barabanov scored the game’s first goal, 5:13 in, flicking a shot from the left side that trickled through Oettinger.

Lindblom lifted a backhander past Oettinger at 9:03 of the second period for the tying goal after Marc-Edouard Vlasic’s shot from the left point was blocked in front of the net.

Karlsson had 19 points in the month to lead all NHL defensemen and had assists in every game. His point streak ties former San Jose forwards Rob Gaudreau (1992-93) and Jonathan Cheechoo (2005-06).

NOTES: Dallas is 15-0-0 when leading after two periods. … With the assists by Karlsson and Vlasic, the Sharks are the first NHL team with 100 points this season from defensemen. … Radek Faksa’s secondary assist on Olofsson’s goal was the checking center’s first point in 13 games. … Jamie Benn, with an assist on Hintz’s goal, has a season-high eight-game point streak for his longest since January 2018. … Reimer, in his 13th NHL season, was denied his 200th career win.

Sharks: Complete a road back-to-back against the Chicago Blackhawks on Sunday.

Stars: Begin a Southern California back-to-back against the Los Angeles Kings on Tuesday.