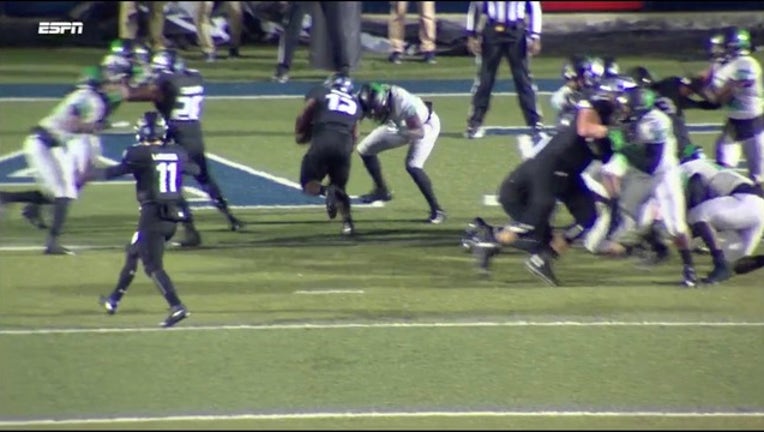 NORFOLK, Va. (AP) - Lala Davis scored from a yard out with 15 seconds left in the game as Old Dominion came from 28 points down in the first half to pull out a 34-31 victory over North Texas in a Conference USA contest Saturday afternoon.

North Texas scored the first four touchdowns, two on runs by DeAndre Torrey, including a 37-yard dash in the first quarter that made it 14-0.

Mason Fine became the all-time leader in yards passing at North Texas with a 23-yard touchdown pass to Rico Bussey Jr. on the Mean Green's opening drive. The junior with three games and his senior year remaining, already holds school records for yards passing, completions, passing efficiency and most games with at least 300 yards passing. He needs 11 touchdown throws to pass Steve Ramsey on the career list -- a record he's held since 1969.

Davis scored from a yard out and Nick Rice kicked a 48-yard field goal to make it 28-10 at intermission. Blake LaRussa hit Travis Fulgham from 13-yards out early in the second half to make it 28-17.