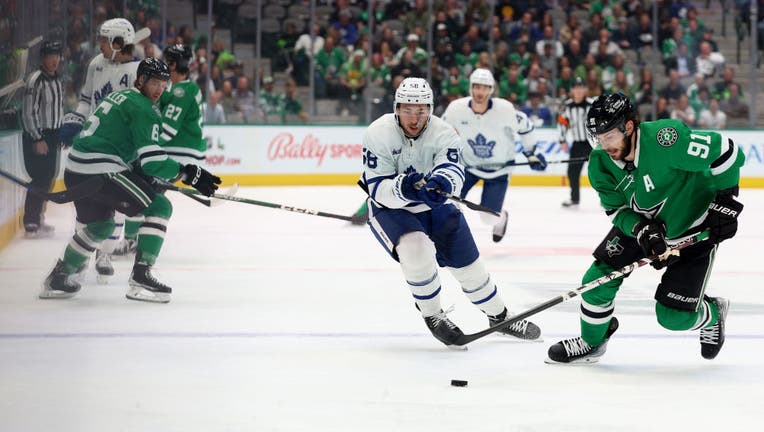 DALLAS, TEXAS - DECEMBER 06: Tyler Seguin #91 of the Dallas Stars controls the puck against Rasmus Sandin #38 of the Toronto Maple Leafs in the first period at American Airlines Center on December 06, 2022 in Dallas, Texas. (Photo by Tom Pennington/G

DALLAS - Matt Murray made a season-high 44 saves and Mitch Marner extended his Toronto-record point streak to 20 games with an early assist as the Maple Leafs beat the Dallas Stars 4-0 on Tuesday night.

John Tavares, Auston Matthews, Rasmus Sandin and Alexander Kerfoot scored for the surging Maple Leafs, who are 9-0-3 in their last 12 games. They pulled within three points of first-place Boston in the Atlantic Division.

Toronto blocked 27 shots in its first shutout this season, and the Stars missed the net on 22 attempts.

"Big thanks to the guys in front who did a heck of a job defensively tonight against a really dangerous team," said Murray, who was acquired from Ottawa last summer and shares time in net with fellow newcomer Ilya Samsonov.

Murray is 6-0-2 since missing 15 games with an adductor injury following his initial start of the season.

"He was perfect," Maple Leafs coach Sheldon Keefe said. "Came up with huge saves in big moments. Obviously, the number of penalties we took today could have been a big problem."

The Stars were shut out for the first time this season and are tied with Winnipeg atop the Central Division with 33 points. The Jets have two games in hand.

It was the NHL’s first game featuring two players with point streaks of at least 18 games.

The Stars’ Jason Robertson saw his run end at 18, a Dallas record. Robertson leads the NHL with 23 goals.

Marner got an assist when his wrist shot was stopped but Tavares tapped in the rebound 4:51 in for the first of two first-period Toronto goals.

"Like I’ve been saying, it’s not a one-man effort," Marner said. "Just trying to go out there and buzz."

Matthews took possession after his wrist shot was stopped and circled back into the slot to score at 17:36.

Sandin collected a loose puck just outside the crease and scored at 12:19 of the second period for a 3-0 lead.

Kerfoot added an empty-net goal with 3:53 remaining, rolling the puck in from center ice. It was his first goal since a 3-2 overtime win at home over the Stars on Oct. 20.

Toronto played most of the game with only five defensemen. Victor Mete left with a lower-body injury after playing just 3:04 of the first period. Mete is expected to miss at least a few games.

During part of Dallas’ 5-on-3 late in the second, the Maple Leafs were further handcuffed when Marner had to give up a broken stick. He still managed to block a shot.

It was the second and final scheduled meeting this season matching Robertson against his younger brother, Maple Leafs forward Nick Robertson.

Their mother, Mercedes, traveled from Michigan to attend the game. She followed her custom in these brotherly matchups by wearing the home team’s sweater and the visitors’ cap.

Nick Robertson scored his only two goals of the season to date in the teams’ previous meeting — including the overtime winner.

"He wasn’t too happy about that," Nick said of his brother when they visited after that game.

Dallas is 0 for 11 on the power play in its past two games after ranking second in the NHL at 30% going into Sunday’s game, a 6-5 shootout loss to Minnesota.

"We had some great looks," captain Jamie Benn said of Tuesday’s effort. "We’ve got to find a way."