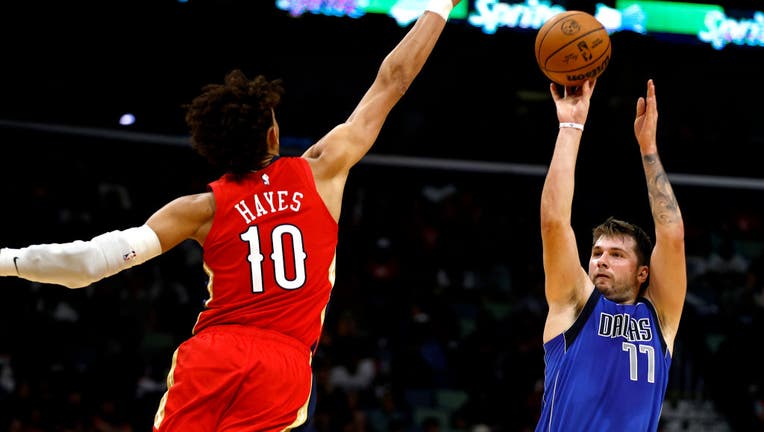 With Brandon Ingram and Zion Williamson out of the lineup, that was the type of all-hands-on-deck effort that short-handed New Orleans sought.

Murphy hit all eight of his shots for 22 points and New Orleans overcame Luka Doncic's latest prolific performance to beat the Dallas Mavericks 113-111 on Tuesday night.

The Pelicans entered the game missing two of their top three scorers in Ingram (concussion protocol) and Williamson (hip bruise), as well as a third starter, Herb Jones (hyperextended knee), who is their top defensive player.

But a laundry list of players looked ready to contribute.

They included Australian rookie and first-round pick Dyson Daniels, who scored his first career points on a jump hook in the second quarter and finished with 11 points in 22 minutes on 4-of-5 shooting.

"They believed in me and I got my opportunity tonight," Daniels said. "I went out there and took it.

"Obviously we don't want guys going down, but we've got a deep roster," Daniels continued. "It was good to get out there with the boys and everyone played together, played the right way, played hard."

Murphy's production included four 3s and some baskets on the drive, including a soaring dunk in the third quarter and a tip-in with six minutes to go.

Doncic scored 37 to go with 11 rebounds and seven assists, but his 3-point attempt at the final horn bounce off the front rim.

"I probably should have gotten a better look, but it’s fine," Doncic said. "It’s hard with 2 seconds (left) to take a layup ... so that’s why I took the (perimeter) shot."

"We got comfortable and played down to our competition," Wood said.

Dallas led by as many as six points in the fourth quarter when Wood's 3 made it 97-91. New Orleans responded with a 7-0 run capped by McCollum's step-back jumper from 16 feet to take the lead and the game remained tight from there.

Alvarado had nine of his points in the first 5:43 of the game, helping the Pelicans off to a 40-point first quarter during which they led by as many as 14 points.

"We wanted to be the first one to throw a punch," said the 6-foot-tall Alvarado, whose scrappy play and aggressive drives to the basket also got the crowd riled up. "Stuff went my way and I got my team going.

Alvarado's transition layup early in the second quarter gave him 13 points in his first 11 minutes on the court — and put the Pelicans in front 47-31.

"This is what builds a championship team, knowing that you don’t have your main guys out there and winning against a really good team," Alvarado said. "It builds confidence in the whole team and gets guys rolling."

The Pelicans led by as many as 16 in the second quarter and were up 64-54 after Valanciunas' 7-foot floater with about three minutes remaining in the half. But Dallas went on a 10-0 run to tie it on Doncic's driving floater off the glass.

Mavericks: Tim Hardaway Jr. sat out because of a sore right foot. "We will re-evaluate him tomorrow to see how he feels," coach Jason Kidd said. ... Doncic made 16 of 30 shots, but missed 11 of his 13 attempts from 3-point range. ... Dallas lost to New Orleans for just the third time in 12 meetings.

Mavericks: At Brooklyn on Thursday night.

Pelicans: At Phoenix on Friday night