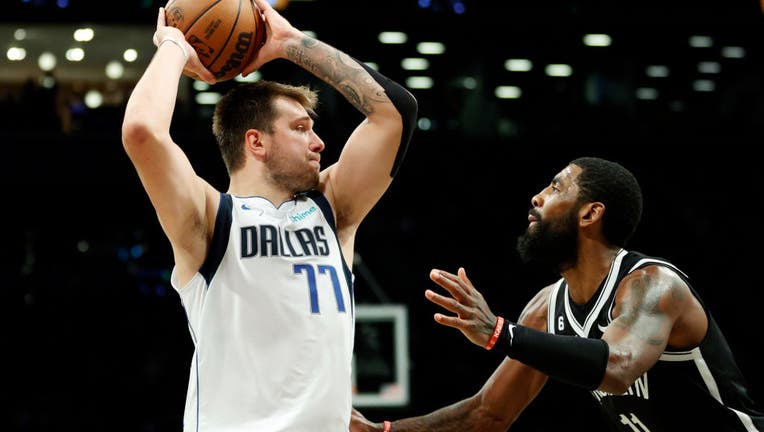 NEW YORK, NEW YORK - OCTOBER 27: Luka Doncic #77 of the Dallas Mavericks looks to pass as Kyrie Irving #11 of the Brooklyn Nets defends during the second half at Barclays Center on October 27, 2022 in the Brooklyn borough of New York City. The Maveri

NEW YORK - Luka Doncic had 41 points, 14 assists and 11 rebounds, setting up three 3-pointers in overtime to send the Dallas Mavericks to a 129-125 victory over the Brooklyn Nets on Thursday night.

Doncic found Tim Hardaway Jr., Maxi Kleber and Reggie Bullock for 3s in the extra period as Dallas built a nine-point lead en route to its first road victory of the season.

Doncic also had two baskets in overtime on the way to becoming the 10th player in NBA history with three 40-point triple-doubles.

Kyrie Irving scored 39 points and Kevin Durant had 37 for the Nets, who have run into some of the NBA’s most dynamic players this week and fallen short each time. First it was Ja Morant with 38 points in Memphis and then Giannis Antetokounmpo with 43 on Wednesday night in Milwaukee.

This time it was Doncic, who had scored more than 30 points in each of the first three games and now has his first 40-point game of the season.

The game was briefly delayed in overtime when a fan threw what appeared to be a cup of ice that landed on the court near the Dallas bench.

The Mavericks (2-2) take on the Oklahoma City Thunder (2-3) Saturday night at the AAC.