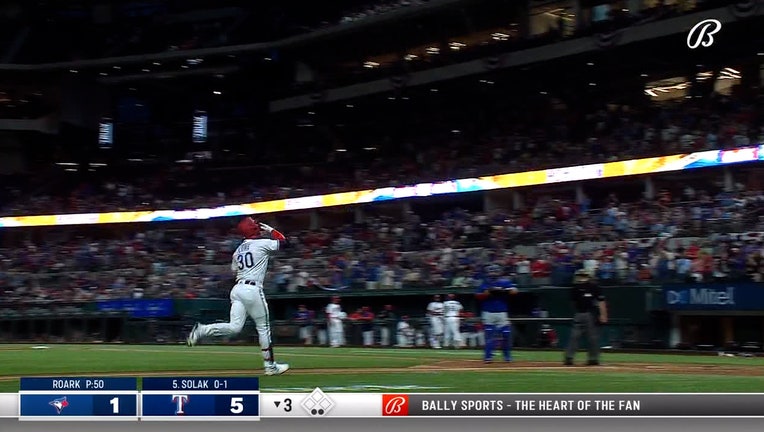 ARLINGTON, Texas - Nate Lowe homered twice and padded his franchise record for RBIs to start the season with four more, leading the Texas Rangers to a 7-4 victory over the Toronto Blue Jays on Tuesday night.

Lowe was the first Texas player to go deep in front of the home fans at Globe Life Field, driving in Isiah Kiner-Falefa when he

Ronald Guzman and Jonah Heim also went deep for the Rangers in their first four-homer game in their year-old ballpark. It was also the first six-homer game in the regular season, with Toronto's Bo Bichette connecting twice.

There were 18,585 fans a day after the Rangers welcomed 38,238 for their home opener, becoming the first major American pro sports team to fill a stadium since the coronavirus shutdown of sports more than a year ago. Texas opened the $1.2 billion retractable roof stadium last season, when fans weren't allowed in during the regular season.

"I feel like I’m a product of this team being a team," said Lowe, who is hitting .381. "I don’t feel like I get RBIs if (David) Dahl’s not in scoring position, if (Joey) Gallo’s not on base, if Kiner’s not leading off the game with a hit, if (Guzman) doesn’t go deep there and provide another run."

"From what we’ve seen in spring training and also leading into this game is that he gets better as he goes," manager Chris Woodward said. "When he gets between the lines, he’s better than he is outside the lines, in bullpens. As he gets more comfortable in games, he gets better and better."

Toronto's Tanner Roark allowed three homers — the other was by

Blue Jays: C Danny Jansen didn't start but was available off the bench a day after taking a foul tip off the inside of his right knee in the series opener. Manager Charlie Montoyo said the hope is for Jansen to return as the starter Wednesday.

Rangers: RHP Brett Martin (lower back tightness) is expected to pitch two innings Wednesday in an alternate-site game against the Astros at the Rangers' Triple-A home in Round Rock. ... 3B Brock Holt left in the eighth inning with right hamstring tightness after sprinting around first and stopping on a single to left-center field.

Center fielder George Springer, who started the season on the injured list with a strained left oblique muscle, remains on schedule to make his Toronto debut Thursday in the Blue Jays' home opener against the LA Angels in Dunedin, Florida. The former Houston star took live batting practice early Tuesday.

"It’s a big step for me both physically and in my own mind," said Springer, the 2017 World Series MVP who signed a $150 million, six-year contract in the offseason. "Obviously I have to see what happens, see how my body responds."

The Rangers are using pitching pairs they call tandems for two spots in the rotation. Those games have produced both of the club's victories. Jordan Lyles allowed two runs in 5 2/3 innings, a longer outing than expected, in a 7-3 win over Kansas City. Wes Benjamin followed with 2 1/3 scoreless innings. They combined to strike out 11.

Lefty Taylor Hearn replaced Dunning and allowed two runs in part because of two wild pitches but struck out two in two innings to give him and Dunning eight Ks.

The series finale Wednesday is a matchup of opening-day starters in Toronto's Hyun Jin Ryu and Kyle Gibson of the Rangers. Both got no-decisions. The lefty Ryu allowed two runs in 5 1/3 innings. Gibson got just one out in the shortest opening-day start in Washington/Texas franchise history and the shortest in the majors in 39 years. The right-hander allowed five runs after taking the mound with a 5-0 lead.