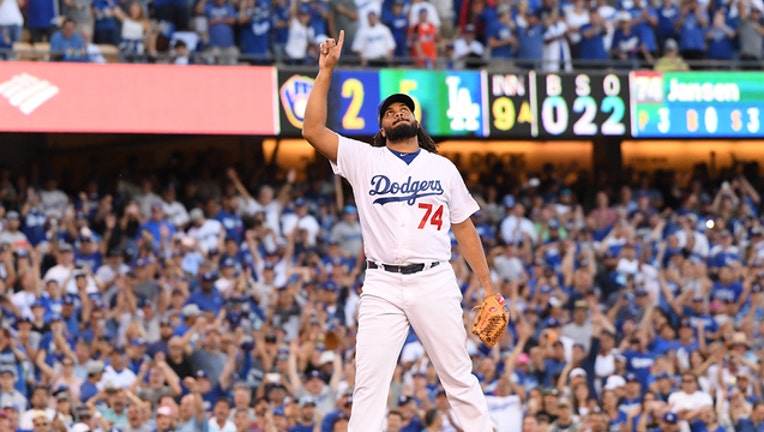 OCTOBER 17: Closing pitcher Kenley Jansen #74 of Dodgers celebrates after striking out Mike Moustakas #18 of the Brewers for the last out to win Game Five of the NLCSeries. The Dodgers defeated the Brewers 5-2. (Photo by Harry How/Getty Images)

LOS ANGELES, CA (FOX 11/AP) - Clayton Kershaw bounced back from one of his worst postseason starts with one of his best, pitching the Los Angeles Dodgers past the Milwaukee Brewers 5-2 Wednesday to move one win from a return trip to the World Series.

The Dodgers took a 3-2 lead in the NL Championship Series, boosted by Max Muncy's go-ahead single in the sixth inning. Kershaw held the lead, leaving after seven.

Game 6 is Friday night in Milwaukee. The Brewers are expected to start left-hander Wade Miley, who walked Cody Bellinger to open Game 5 before getting pulled in an interesting piece of strategy by manager Craig Counsell. Lefty Hyun-Jin Ryu will go for the Dodgers.

The Dodgers haven't been in back-to-back World Series since losing to the Yankees in 1977 and '78. They were beaten by Houston in Game 7 last year.