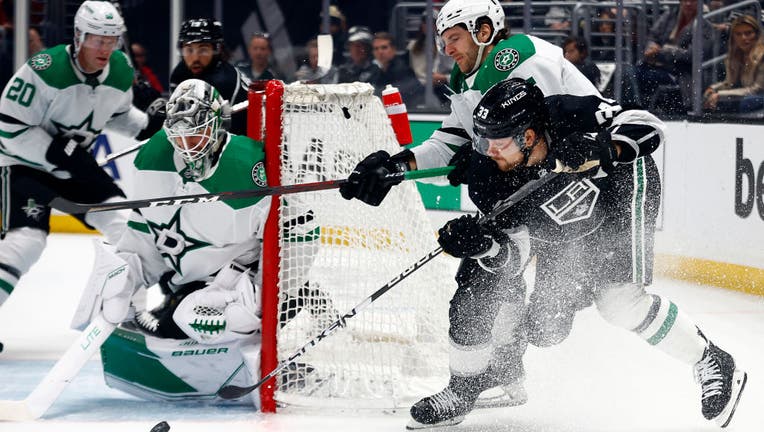 LOS ANGELES, CALIFORNIA - JANUARY 03: Viktor Arvidsson #33 of the Los Angeles Kings takes a shot against Jake Oettinger #29 of the Dallas Stars in the second period at Crypto.com Arena on January 03, 2023 in Los Angeles, California. (Photo by Ronald

LOS ANGELES - Adrian Kempe broke a tie on a power play midway through the third period and the Los Angeles Kings beat Dallas 3-2 on Tuesday night to snap the Stars’ four-game winning streak.

"We got a good opportunity tonight, and it bounced the right way," Kempe said.

Pheonix Copley made 28 saves for his seventh straight victory. He’s the fifth goalie in Kings history to have such a streak.

"He’s come in, and he’s settled everything down, and he’s stabilized the group," Los Angeles coach Todd McLellan said. "Right now Pheonix has the hot hand."

"Pretty even game through two," Stars coach Pete DeBoer said. "They cranked it up a level in the third, and we’ve typically been a real good third period team, but they were the better third period team tonight."

The Stars failed to pick up at least one point for just the fifth time in their past 25 games. Dallas has 15 wins and five overtime or shootout losses in that span.

Kempe’s power-play goal put the Kings ahead 3-2 at 9:25 of the third period. He and Kevin Fiala used their speed to create an impromptu 2-on-1 rush, with Kempe burying his shot from just outside the crease to net 15 goals in consecutive seasons for the first time.

"It was a tight game and it came down to special teams in the third period," Kempe said. "Power play has been pretty solid all year, I feel like. … Got a big goal at the end, so that was huge."

The action picked up in the second period, leaving the game tied at 2.

Heiskanen got the Stars on the board at 6:31 on a long shot from the blue line through traffic.

Kopitar put the home team back up 2-1 at 8:13, redirecting in Drew Doughty’s shot from distance for his 11th goal of the season.

Robertson made it 2-all 56 seconds later, burying his wrist shot from the slot off Joe Pavelski’s crisp centering pass.

"Big-time play," DeBoer said of Pavelski, who has 38 points in 39 games. "That line was dangerous again all night. I just didn’t think we had enough other lines going."

Los Angeles held Dallas scoreless in three power-play chances, the first time in 11 games its penalty kill hadn’t given up a goal. The Stars had the second-best road power-play unit in hockey at 32.8% coming into the game.

The Kings will have a pretty good idea of how high their ceiling might be after this current four-game stretch, which now sees them face Eastern Conference-leading Boston on Thursday, playing at Pacific Division foes Vegas on Saturday and hosting an Edmonton team on Monday that ousted them in last season’s playoffs.

"That’s how you kind of gauge where you’re at and what you can improve on, and so it’s great," Copley said. "Playing against the best, that’s what you want to do."

Doughty has at least 20 assists for the 10th straight season. The only time in his 15-year career he failed to reach that mark was the lockout-shortened 2012-13 campaign. … The Kings could get F Trevor Moore (upper body) and Arthur Kaliyev (lower body) back against Boston on Thursday. Moore missed his fourth straight game, Kaliyev his sixth in a row.

Stars: At Anaheim on Wednesday night.