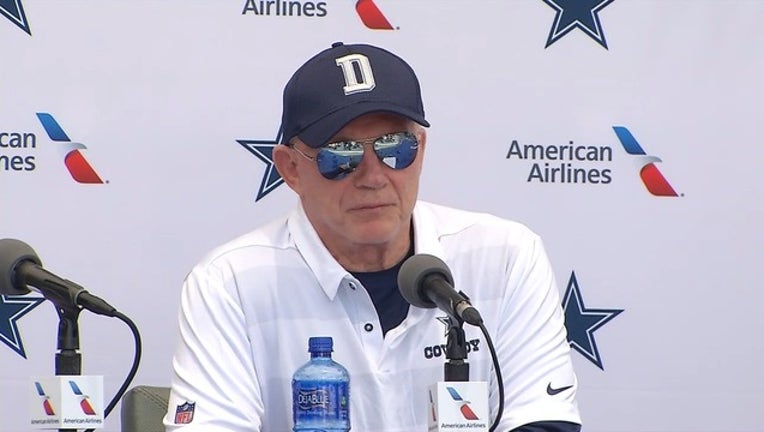 FRISCO, Texas (AP) - Even if the Dallas Cowboys were better than 3-5, Jerry Jones says he would have plenty of cause for concern based on what he saw in a damaging loss to Tennessee.

And the normally upbeat owner and general manager doesn't care to discuss the NFC East standings, even though the Cowboys can pull even with defending Super Bowl champion Philadelphia by getting their first road win of the season at the Eagles on Sunday.

"We're not in anything if we don't play better," Jones said after a 28-14 loss to the Titans that looked like it could be a blowout win for Dallas midway through the first quarter. "What I recognize is not so much the three wins and five losses but the way we lost this game and the way we played in the game.

"We've got to play better. Our record could be better than it is right now, and we'd still be in trouble."

The Cowboys traded for a new No. 1 receiver in Amari Cooper and fired offensive line coach Paul Alexander during a surprisingly busy open week. The changes looked good early, with Cooper scoring the first Dallas touchdown and star running back Ezekiel Elliott having 75 yards from scrimmage in the first quarter.

Everything changed with Dak Prescott's throw to Cooper in double coverage in the end zone with a 7-0 lead. Kevin Byard intercepted, Tennessee drove 80 yards in 15 plays for the tie and the Titans never trailed again.

Now the Cowboys are looking at a second straight year of missing the playoffs since the remarkable rookie seasons for Prescott and Elliott, who powered Dallas to an NFC-best 13 wins before a divisional round loss to Green Bay.

Since a franchise-record 11-game winning streak for an 11-1 record two years ago, the Cowboys are 14-15, including the loss to the Packers.

Jones was peppered with questions about Garrett's job security after the loss to the Titans, at one point flatly saying he wouldn't fire him during the season. Anything less than a 6-2 finish would leave Garrett with three winning seasons, and two playoff appearances, in eight full seasons.

"I don't know how to articulate my patience or lack thereof, and I'm not trying to be smart," Jones said. "I just don't have an assessment of my patience right now."

Prescott committed his first two turnovers at home this season in Dallas' first loss at AT&T Stadium. The interception was the game-changer. A fumble while trying to churn for yardage on a sack at his 40-yard line set up Tennessee's go-ahead touchdown in the third quarter.

While it's realistic to expect Prescott and Cooper to need time to work together and an offensive line to adjust to an in-season coaching change, the Cowboys are running out of it.

"As coach Garrett said, we've got a decision to make," said Prescott, who threw for 243 yards and two touchdowns. "We've got to buckle down, lock arms and be together more than ever. Not let anything break us apart."

Garrett revealed a possible crack Tuesday. A few weeks after strongly backing Scott Linehan when asked if he still had faith in his offensive coordinator, Garrett had a different tone when asked if he envisioned a scenario where he took over play-calling.

"Right now, Scott Linehan is going to call the plays on offense," Garrett, who called plays early in his tenure as head coach, said after the Cowboys had just 109 yards total offense in a scoreless second half against the Titans.

If the Cowboys lose to the Eagles, not much else will matter, other than the question of Garrett's future beyond this season. Jones declined several chances to address that issue.

"I think we realize we have eight games to go, we've got a long way to go in this season," Jones said. "We want to play better than we played tonight, so I certainly think each individual and coach and front office person is going to have to do better, including me."

NOTES: Garrett said rookie LG Connor Williams came out of the Titans game with a knee injury that could require arthroscopic surgery. Any possible line shuffling would appear to be confined to Williams' spot and center, where Joe Looney has filled in all season with four-time Pro Bowler Travis Frederick battling a nerve disorder. The likely candidate to join the group is backup center Adam Redmond, who has done some work in practice at guard in practice. ... Garrett indicated LB Sean Lee will have another extended absence after re-injuring a hamstring. Lee missed three games earlier this year with the same injury.