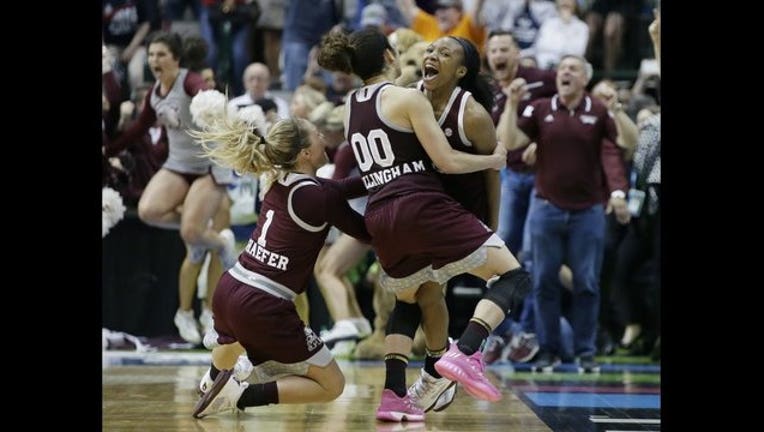 DALLAS (AP) - Now that UConn is surprisingly out of the way, it's time for an SEC party with a pair of teams that have never played in the NCAA women's championship game.

Mississippi State's 66-64 upset that snapped the Huskies' record 111-game winning streak Friday night means a third meeting this season with South Carolina, this time on Sunday for the title.

Some new blood is filling in for the blue bloods at the Final Four, with the Bulldogs pulling their stunner in their first trip to the semifinals and the Gamecocks taking over in the second half of their second visit and beating frequent semifinalist Stanford 62-53.

"It's amazing, but you know the job's not finished," said South Carolina guard Kaela Davis, who transferred from Georgia Tech with the idea of playing for a title. "We've done something, the first in program history. For us, we're aiming for another first."

Instead of Geno Auriemma going for a fifth straight title and 12th overall with UConn, it'll be a pair of first-time coaches in South Carolina's Dawn Staley and Mississippi State's Vic Schaefer.

But they're not complete novices. Staley made three straight Final Fours as a player with Virginia in the early 1990s without winning a title before leading South Carolina to its first bid two years ago. Schaefer was on the staff when Texas A&M won the championship six years ago.

The Gamecocks (32-4) won both previous meetings, 64-61 at home during the regular season and 59-49 in the SEC Tournament championship in early March in Greenville, South Carolina.

"This team's been really good about on to the next one," Schaefer said. "You walk in the locker room, there's not a lot of jumping around. We're going into round three with South Carolina. We've had two knockdown, drag-outs with them."

It's the third all-SEC title game, following Tennessee-Georgia in 1996 and Tennessee-Auburn in 1989. The Vols won both. Tennessee was also the last SEC team to win a NCAA title in 2008.

As for a bevy of players who will be on the biggest stage for the first time, a budding star has a head start.

Bulldogs guard Morgan William, a 5-foot-5 junior, is coming off the buzzer-beating shot that took down the four-time champs in overtime. Her previous game, she scored a career-high 41 points in the regional finals to spoil Baylor's chance to play in the Final Four just 100 miles from campus.

Victoria Vivians' 3-point shooting helped Mississippi State build a 16-point lead in the first half against UConn, while Breanna Richardson and Teaira McCowan provided the inside muscle that helped hold down one of the best offensive teams in the country.

"It's a huge win, but I think in the back of our mind we know that there's one more game left," guard Dominique Dillingham said. "We didn't come this far for nothing. We want to win it all, and we know we can win it all."

Mississippi State's next game plan is likely to start with 6-foot-5 forward A'ja Wilson, who had 13 points, 19 rebounds and three blocks against the Cardinal. But a pair of junior transfers will also be the focus - Allisha Gray and Davis.

Gray had a big second half and led the Gamecocks with 18 points against Stanford, and Davis will be looking to bounce back from a 2-of-15 shooting night in the Final Four debut for both guards.