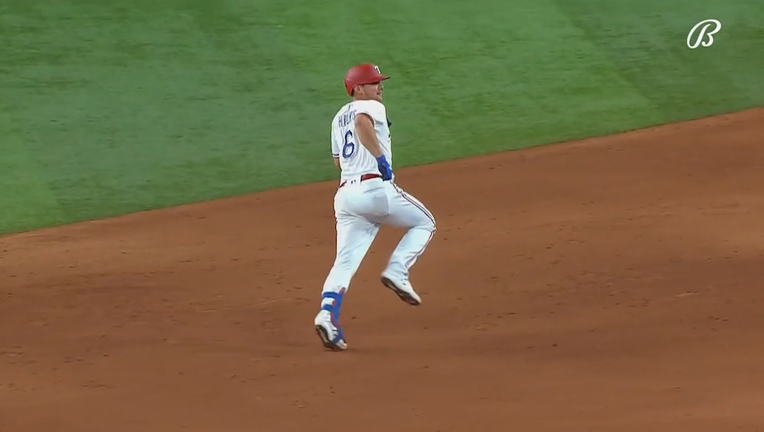 ARLINGTON, Texas - John Hicks became the first player to homer in his first four games with the Rangers/Washington Senators franchise and added a go-ahead single in the seventh inning to lead Texas over the Detroit Tigers 10-5 on Tuesday night.

Hicks, brought up from Triple-A Round Rock on June 29 after catcher Jose Trevino got hurt, hit a two-run homer of the left field foul pole in the fourth that put the Rangers ahead 2-1 in a four-run inning.

"Fortunately, I’ve gotten good pitches to hit and thankfully hit them well enough they went over the fence," said Hicks, who played with the Tigers 2016-19. "I’m not trying to hit the ball right out of the pitcher’s hand. Just trying to be relaxed."

"There’s some loud sounds coming out of that bat right now," Texas manager Chris Woodard said. "It kind of gives a jolt to everybody in the lineup."

Hicks became the fourth player to hit four or more homers in his first four games with a team after six by Colorado’s Trevor Story in 2016 and four each by Philadelphia’s Jay Bruce (2019), St. Louis’ Paul Goldschmidt, the New York Mets’ Mike Jacobs (2005) and Pittsburgh’s Reggie Sanders (2003), according to Stathead.

"Ol’ Hicksy — I told him ‘Take it easy on me today,’ and he didn’t," said Detroit catcher Jake Rogers, a Texas native whose family was present to see him homer off the batter’s eye in the sixth inning.

With the score 5-5 in the seventh, Adolis García and Joey Gallo singled off Daniel Norris (0-3) with one out, Joe Jiménez relieved and Hicks singled to left, driving in García. The ball eluded left fielder Eric Haase for an error as Gallo scored and Hicks advanced to third.

David Dahl doubled for an 8-5 lead.

Haase, primarily a catcher but occasional outfielder, had tied the score when he hit a three-run homer off John King (7-5) as a pinch hitter in the top half. King had allowed Rogers’ solo homer in the sixth.

Brock Holt and García hit solo homers in the eighth off Bryan Garcia, the second of the season for Holt and 21st for García, a rookie.

"The guys were coming back to the dugout having a hard time picking up his pitches," Tigers manager A.J. Hinch said of Dunning, "and our swings kind of showed it."

Dunning hasn’t pitched beyond six innings in any start this season by design.

"There’s definitely going to starts where we just let him go, maybe after 90 or 100 pitches at some point in time," Woodward said. "I don’t know if that’s this year."

Two of the batters who reached on his walks came around to score.

"If we make the play behind him and stop that inning at a two-run inning as opposed to a four-run inning, we might be thinking a little bit differently about the outing," Hinch said.

Isiah Kiner-Falefa pulled a scorching grounder that third baseman Jeimer Candelario couldn’t backhand for a two-run double that capped the fourth. David Dahl knocked out Ureña with an RBI double in the fifth.

King leads Texas in wins and is tied for the club lead in losses. … Grossman tied a career high with his 11th home run. … Dunning’s 64 pitches were his fewest since throwing 62 on April 23. … Tigers bench coach George Lombard began filling in as third base coach until the All-Star break following Chip Hale’s exit to the University of Arizona.

Tigers OF Daz Cameron (sprained big right toe) will sit out the full three-game series on artificial turf after hurting the toe before Monday’s game. Hinch said Cameron might go on the 10-day injured list.