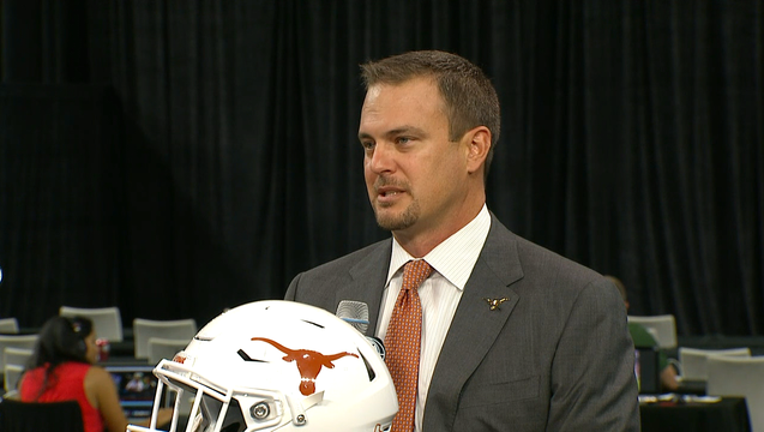 FRISCO, Texas (AP) - When Tom Herman first met with Texas players after becoming their coach, he asked who had been part of a winning season with the Longhorns. Only three raised their hands.

Then there are the high school players the Longhorns are recruiting now, 16- and 17-year-old kids that Herman points out have seen Texas put up twice as many losing seasons (four) as Big 12 titles in their lifetimes.

"The Texas they know is a lot different than the Texas that people in my generation know," the 42-year-old Herman said Tuesday at Big 12 media days. "So it's our job to show them what Texas is capable of, what Texas has been in the past, and what we're planning on being again in the future."

That is the starting point for Herman, who eight months ago took over a Texas program coming off three consecutive losing seasons for the first time since the 1930s.

Texas won the Big 12's last national championship, but that was way back in 2005 with quarterback Vince Young. Since the Longhorns won their last conference title in 2009, Oklahoma has won four of its record 10 Big 12 titles.

The Sooners also have a new coach this season. But Lincoln Riley, who is nine years younger than Herman, took over a team that won the last two Big 12 championships and went to a playoff game in 2015 before coach Bob Stoops' surprise retirement last month.

Herman was a young graduate assistant at Texas in 1999 and 2000, early in coach Mack Brown's tenure that included that national championship. The Longhorns had won the inaugural Big 12 title under John Mackovic in 1996, but he was gone a year later after a losing season and replaced by Brown.

The situation is a bit different for Herman's return as head coach. Texas was 16-21 in three seasons under Charlie Strong.

"I know that it went through a tremendous storm," Herman said. "There was a lot of non-continuity ... there just wasn't any stability from the top down."

That was also the stretch when longtime athletic director DeLoss Dodds retired. Another AD has since come and gone, and the school's presidency also changed hands during that time.

"Other than that, I haven't really spent a whole lot of time thinking about it because, you know, what'd done is done," Herman said. "And our job is to make sure that whatever happened doesn't happen again."

Herman said he hasn't had a whole lot of time to reflect on his short time at Texas, "nor will I here shortly."

When on the podium to start the second day of the league's media days, Herman didn't even wait for reporters to ask him about expectations for the Longhorns. He said during his introductory remarks that he didn't know, but that his team will be trained as well as anybody in the country and will play to its maximum potential.

"What that is, I don't know right now, but I feel good that these guys are willing to do whatever we ask them to coming off the three-year stretch that this program has had," Herman said. "They don't want that to be their legacy. They want to be remembered as the team and the group that turned this thing around. I think we're well on our way."