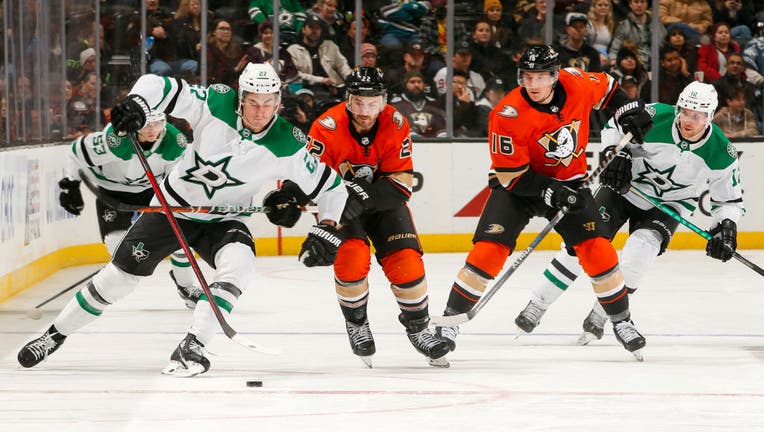 ANAHEIM, CA - JANUARY 4: Mason Marchment #27 of the Dallas Stars and Kevin Shattenkirk #22 of the Anaheim Ducks battle for the puck during the second period at Honda Center on January 4, 2023 in Anaheim, California. (Photo by Debora Robinson/NHLI via

ANAHEIM, Calif. - John Gibson stopped 35 shots for his 24th career shutout, Mason McTavish had a goal and an assist, and the Anaheim Ducks defeated the Dallas Stars 2-0 on Wednesday night.

It was Gibson's first shutout since Nov. 2, 2021, against New Jersey, and his second in 14 career games against the Stars.

"We played a good team game. Everybody was blocking shots, getting the puck out and getting it deep. We stuck to our game plan," said Gibson, who tied Guy Hebert for second in franchise history with 173 wins.

It was the 12th time this season Gibson made at least 35 saves, five more than any other NHL goaltender. He is third in the league with 827 saves.

The shutout appeared to be in peril after Troy Terry was called for tripping with 1:55 remaining, but the Ducks were able to kill off the power play with five blocked shots and two saves by Gibson.

"It’s great for Gibby. He has seen a lot of rubber this year and it was great for our team that we can get it locked down at the end," Anaheim coach Dallas Eakins said. "I don’t know how many blocked shots we had, but it seemed like we were diving in front of everything that we could in the third period."

Adam Henrique also scored for the Ducks, who scored both their goals in the first period.

Scott Wedgewood made 25 saves for the Central Division-leading Stars, who have dropped two straight after a four-game winning streak. They are 1-2 in the second game of back-to-backs.

"You get in a hole like that, and when the goalie at the other end is hot like he was tonight, that’s a bad formula for us. I think that came back to bite us," Dallas coach Peter DeBoer said. "When you've got a goalie that’s hot like that, you've got to get in his eyes, you've got to make it tough on him, you've got to take pucks to the crease. We should’ve done a better job of that."

Henrique scored his 12th goal of the season and third in the past four games when his shot from just outside the left faceoff circle deflected off the stick of Dallas defenseman Jani Hakanpää and past Wedgewood's glove at 3:11 of the first.

McTavish extended the lead eight minutes later on a one-timer while the Ducks were on a power play. The 19-year-old center took a cross-ice pass from Trevor Zegras and buried it. McTavish has 22 points (seven goals, 15 assists), which is tied for second among NHL rookies.

"It was a nice pass from Zegras," McTavish said. "We had some good looks on the power play, we were in the zone for a while there, so it was nice to see that one go."

Zegras learned an important rule late in the second period, when he was called for an illegal stick penalty.

Zegras earned the two-minute minor after he took the stick of Dallas forward Joel Kiviranta and tried to play with it after Zegras broke his own.

"I honestly thought I was the smartest guy on the ice, if we’re gonna be completely honest," Zegras said. "Everyone knew it was a penalty but me, I guess."

Roope Hintz took a puck off the right leg during the second period but was able to return.

Stars: Return home to host the Florida Panthers on Sunday.