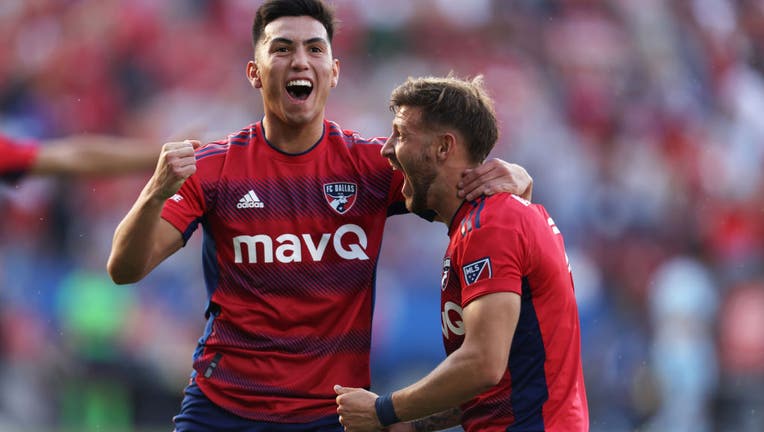 FRISCO, TX - OCTOBER 09: Paul Arriola #7 of FC Dallas celebrates with his teammate Alan Velasco #20 after scoring a second goal for his team during the MLS game between FC Dallas and Sporting Kansas City at Toyota Stadium on October 9, 2022 in Frisco

FRISCO, Texas (AP) - Paul Arriola scored in the 65th minute to send FC Dallas to a 2-1 victory over Sporting Kansas City in a regular-season finale on Sunday.

Dallas (15-9-11) had already qualified for the playoffs before going out and earning its 53rd point -- 20 more than last season. Dallas snapped a two-game home skid against Sporting KC (11-17-7).

Sebastian Lletget scored in the 33rd minute to give Dallas a 1-0 lead at halftime. Jesus Ferreira and Arriola notched assists on Lletget's first goal of the season.

Graham Zusi's second goal of the season came in the 51st minute and pulled Sporting KC even.

Dallas regained the lead for good on Arriola's 10th goal of the campaign.