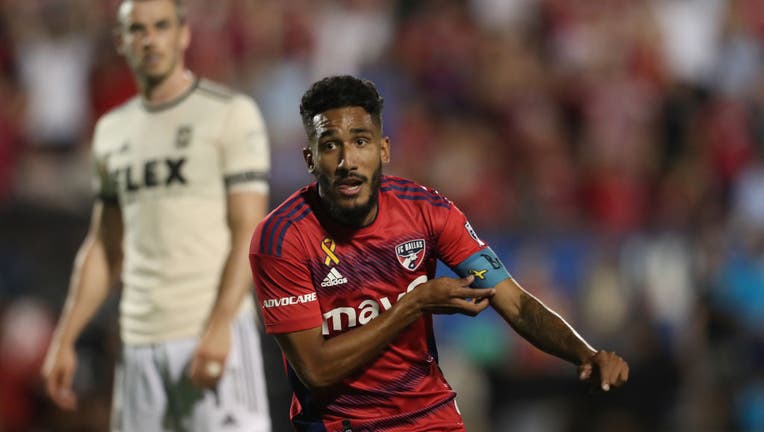 FRISCO, Texas (AP) - Jesús Ferreira scored two goals in the closing minutes to tie the Dallas season scoring record with 18 goals Saturday night in a 2-1 win over Los Angeles FC, which played a man short after Ryan Hollingshead was ejected in the 13th minute.

Ferreira tied the game with a goal in the 78th minute, combining with Paul Arriola to catch LA asleep after a free kick was awarded not far from the corner flag. While LA players walked toward the penalty area, Arriola poked the restart to Ferriera, who was at the edge of the 6-yard box and slotted past goalkeeper Maxime Crepeau and inside the far post from an acute angle.

Ferreira scored on a free kick from just to the side of the penalty area in the 81st. He tied the team scoring record set by Jason Kreis in 1998 and matched by Kenny Cooper in 2008.

Hollingshead with sent off after pulling down a sprinting Arriola just outside the penalty area. Referee Jon Freemon originally showed a yellow card but changed it to red after a video review.

Christian Arango scored for the fourth straight game for LAFC (19-8-3). He flicked the ball over goalkeeper Maarten Paes off Giorgio Chiellini’s first Major League Soccer assist in the fourth minute of first-half stoppage time, his 16th goal this season.

Dallas outshot LAFC 13-9, with eight shots on goal to two for LAFC.

Paes saved one of the two shots. Crepeau saved six of the eight shots.

Dallas next plays on Saturday against the San Jose Earthquakes on the road, and LAFC will visit Minnesota United on Tuesday.