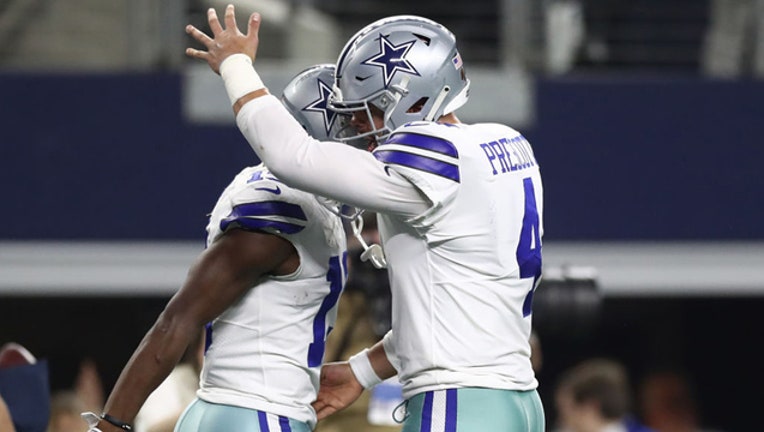 ARLINGTON, Texas (AP) - Dak Prescott saw an opening up the middle, then three defenders between him and the first down.

The Dallas quarterback found a way to get there, and get his first playoff victory two years after a sensational rookie season ended in disappointment.

Ezekiel Elliott rushed for 137 yards and the go-ahead touchdown in the fourth quarter, Prescott scored on a sneak after his dazzling head-over-heels run and the Cowboys hung on for a 24-22 wild-card win over the Seattle Seahawks on Saturday night.

The win for the Cowboys (11-6) was the first for Elliott and Prescott after losing a divisional game in their playoff debut as first-year stars two years ago. Dallas will play at either New Orleans or the Los Angeles Rams in the divisional round next weekend.

"It's really just a chance to keep going on, simple as that," Prescott said. "Me and this whole team, we want to win it all. You can't do that without taking care of the first one. A lot of excitement, but my goal is bigger than just one playoff win."

The loss ended a run of nine straight victories in playoff openers for the Seahawks (10-7). The Elias Sports Bureau says it was the longest streak in NFL history.

Leading 17-14, Prescott faced third-and-14 from the Seattle 17 with the 2-minute warning approaching. He took off up the middle on a QB draw, barged through a trio of defenders 6 yards short of the first and went down at the 1 when he was flipped head-first by Tedric Thompson.

Prescott, who also had an 11-yard scoring pass to Michael Gallup in the first half, scored on the next play in the eighth win in nine games for the Cowboys.

"He's just a rare guy," coach Jason Garrett said. "His leadership, his toughness, just his way, his spirit. It's like none other. Somehow, some way, he's going to figure this thing out for us."

Dallas' defense, ranked in the top 10 most of the season, stifled the NFL's No. 1 rushing offense and mostly kept quarterback Russell Wilson under control and handed him his first loss in four wild-card games.

The Seahawks had finished the regular season with six wins in seven games to secure Wilson's sixth playoff trip in seven years despite a roster overhaul and 0-2 start.

"This has been a special, special year," Wilson said. "Just the growth of our team, the men in the locker room, just the way that we've played together, just eliminating the doubters and the things that people thought that we could only do."

Prescott, the NFL Offensive Rookie of the Year in 2016 when the Cowboys lost to Green Bay at home as the top seed in the NFC, threw for 226 yards, and his sneak for what appeared to be a clinching score because Dallas burned more than five minutes while taking 24-14 lead.

But Tyler Lockett's 53-yard catch set up a quick Seattle touchdown - Wilson's 7-yard scoring pass to J.D. McKissic. The Seahawks got within two on their second 2-point conversion following an injury to Sebastian Janikowski.

The missing kicker left the Seahawks no good options on an onside kick with 1:18 remaining. Punter Michael Dickson's drop kick was caught by Cole Beasley at the Dallas 31, sealing the first playoff win for the Cowboys since beating Detroit in the wild-card round in the 2014 season.

After Wilson ran for 4 yards for a touchdown and Mike Davis' 2-point conversion run put Seattle up 14-10 late in the third quarter, Prescott led a 67-yard drive to put the Cowboys back in front for good.

A 34-yard pass to Amari Cooper , who had seven catches for 106 yards, led to Elliott's 1-yard plunge after an apparent touchdown by the quarterback was overturned on replay.

Prescott then had a chance to give the Cowboys a 10-point lead, but K.J. Wright made a juggling interception in the end zone.

Dallas' defense came through again, though, forcing a punt and giving Elliott a highlight play before Prescott added his. The NFL rushing leader stiff-armed Shaquill Griffin on a 17-yard run to get inside the 20.

Seattle got a double dose of bad news at halftime when Janikowski missed a 57-yard field goal on the final play and injured his left hamstring. He yelled as he grabbed the back of his leg and limped to the locker room, unable to return.

Still, the Seahawks took their first lead basically because the 40-year-old's injury forced them to try.

Facing fourth-and-5 in Janikowski's range from the Dallas 39, Doug Baldwin made a toe-dragging catch on the sideline for 22 yards. After Wilson's TD run, the Seahawks pushed their lead to 14-10 on Mike Davis' run.

But the Cowboys never did lose control of the Seattle running game after allowing Chris Carson's first career 100-yard game in a Week 3 Seattle win that turned the season for the Seahawks, who finished the regular season with six wins in seven games.

Carson had just 20 yards on 13 carries. Wilson was 18 of 27 for 233 yards, with Lockett getting four catches for 120 yards. The Seahawks had 73 yards rushing after averaging 160 during the season. Dallas came in with the No. 5 rushing defense.

"Once we go up, we do a pretty good job of getting ourselves back down, knowing that we've got to start over next week and we've got to be able to do it again," linebacker Leighton Vander Esch said. "It's a full attack mode."

Cowboys receiver Allen Hurns fractured his left ankle in a gruesome first-quarter injury. Owner and general manager Jerry Jones said after the game that Hurns was "probably in surgery at this time." Hurns was being dragged down by Seahawks safety Bradley McDougald at the end of a 14-yard catch for a first down when his lower left leg appeared to buckle. ... Seahawks cornerback Neiko Thorpe left in the first half with a shoulder injury.

Cowboys: New Orleans or the Los Angeles Rams on the road in the divisional round next weekend.