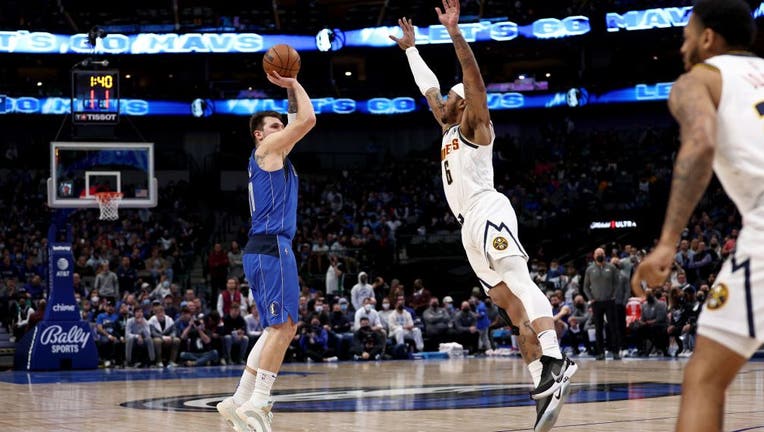 DALLAS, TEXAS - JANUARY 03: Luka Doncic #77 of the Dallas Mavericks shoots the ball against Giorgi Bezhanishvili #6 of the Denver Nuggets in the second half at American Airlines Center on January 03, 2022 in Dallas, Texas. (Photo by Tom Pennington/Ge

DALLAS - Luka Doncic had 21 points and matched a season high with 15 assists as the Dallas Mavericks beat the Denver Nuggets 103-89 on Monday night.

Dwight Powell and Reggie Bullock added 15 points each for the Mavericks, who swept a back-to-back and matched their longest winning streak of the season at three games.

Nikola Jokic had 27 points and 16 rebounds to lead the Nuggets, who had a three-game winning streak snapped.

"He really was finding shooters on the floor," Nuggets replacement coach Popeye Jones said of Doncic, who also had eight rebounds and four steals. "He’s clever and kept getting the switch when there was confusion. He made us pay. That’s what great players do."

The Nuggets trailed from the final two minutes of the first period on and by nine at halftime but were within 76-72 with 8:22 to play before the Mavericks pulled away on a 22-10 run that featured six 3-pointers. Dallas was 14 for 37 behind the arc, 7 for 12 in the fourth quarter.

"The whole game, we were pretty solid, especially our defense today was amazing," said Doncic, who played 36 minutes after playing 31, his third-lowest total this season, in his return on Sunday. "It’s not going to happen that they’re not going to make a run. And we stayed together, and we just stayed aggressive."

Dallas played without Kristaps Porzingis, who entered the COVID-19 health and safety protocol on Monday morning. The Mavericks just got back Doncic, Tim Hardaway Jr. and Maxi Kleber from the protocol for Sunday night’s win at Oklahoma City. Doncic missed five games while in the protocol after missing five with an injured knee.

With Porzingis out, the Nuggets outrebounded the Mavericks 47-28 and outscored them 12-2 on second-chance points. But they committed a season-high 26 turnovers and were outscored 28-14 in points off turnovers.

"We’re getting our hands on the ball," Dallas coach Jason Kidd said. "If we get outrebounded like we did, then it’s probably a loss. But forcing turnovers, turnovers turn into points or a possession for us and one less shot for them."

The Nuggets had three players in the protocol, including regular starters Jeff Green and Monte Morris, but got back Bones Hyland after a one-game absence. Hyland was in Denver on Monday morning when he was cleared and flew commercially to Texas.

The Mavericks led by as many as 13 points during the first half. Dallas outscored Denver 16-4 in the half when Jokic was off the floor, all four points coming on free throws.

HOW THE OTHER HALF LIVES

Jones is 1-1 filling in for fellow assistant David Adelman. Adelman was filling in for head coach Michael Malone, who entered the protocol on Thursday.

"Now I’ve experienced both sides of it (as a head coach)," Jones said. "I’ve always been told that in this business there’s only two things. That’s winning and misery."

Jones’ 11-year NBA career contained two seasons when he was a Mavericks teammate of Kidd (1994-96).

Jokic and teammate Austin Rivers were assessed technically fouls during the first half while on the bench. Rivers was still unhappy after receiving his second personal foul seconds earlier.

The Nuggets’ postponed game at Brooklyn on Dec. 19 has been rescheduled for Jan. 26, dropped into an existing five-game trip Jan. 25-Feb. 2. That becomes six games in nine days beginning and ending with back-to-backs.

Last Thursday’s postponed home game against Golden State has been rescheduled for March 7.

Nuggets: 7-foot-2 Bol Bol hit his first 3-pointer this season in four tries. He’s 14 for 37 from downtown in his three NBA seasons. … Reserve forward Vlatko Cancar was carried to the locker room in the final minute of the third period with an apparent ankle injury.

Mavericks: They moved back over .500 for the first time since Dec. 13. … Kleber blocked Jokic twice in the first half and also made a steal from the defending MVP.

Mavericks: Hosting Golden State on Wednesday with Dirk Nowitzki’s No. 41 jersey retired after the game.