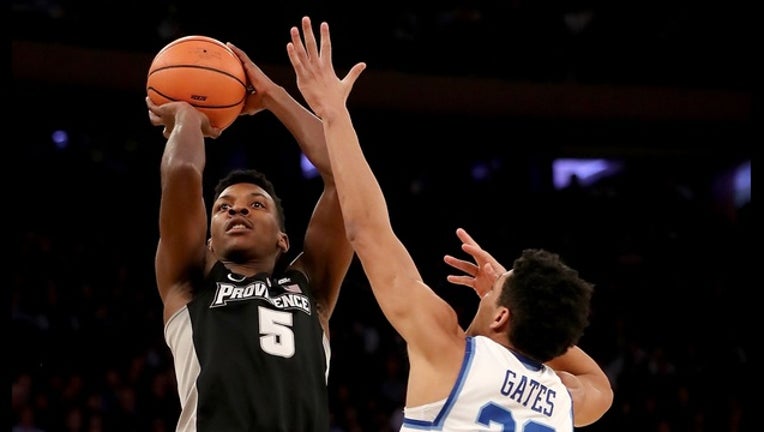 Rodney Bullock of Providence takes a shot against Kaiser Gates of Xavier in the first half during semifinals of the Big East Basketball Tournament at Madison Square Garden on March 9, 2018 in New York City. (Photo by Elsa/Getty Images)

Underdogs are a big part of NCAA Tournament lore and almost every year a few double-digit seeds make a surprising run deep into the bracket. Here are a few of the candidates - from No. 10 all the way to No. 16 - that could wreck some brackets over the next couple weeks.

Providence is a program with a rich NCAA Tournament history, making Final Four appearances in 1973 and 1987. It also made a run to the Elite Eight in 1997 as a No. 10 seed. The Friars are playing some of their best basketball of the season, getting wins over Creighton and Xavier in the Big East Tournament. They've beaten some really good teams this year, including Xavier (twice) and Villanova.

DON'T FORGET: Butler. The Bulldogs are no stranger to deep runs in the tournament, though the No. 10 seed is a little low compared with recent history.

The Aztecs are quite comfortable in the NCAA Tournament, winning games in the Big Dance in 2011, 2013, 2014 and 2015. They're also getting hot at the right time with nine straight wins, including an impressive run through the Mountain West Tournament . In nonconference play, a win over Gonzaga is the highlight.

DON'T FORGET: There are a lot of candidates at this spot. UCLA and Syracuse have ample NCAA history. St. Bonaventure and Loyola of Chicago come from tough basketball conferences. Loyola beat Florida earlier this season.

New Mexico State has won 28 games this season, including an eye-opening victory over sixth-ranked Miami during nonconference play. The last time the Aggies were a No. 12 seed was in 2010, when they narrowly lost to Michigan State 70-67.

DON'T FORGET: Davidson. The Wildcats certainly have plenty of momentum. They earned a bid thanks to an Atlantic 10 Tournament championship and have won eight of their past nine games. The only loss was in triple overtime to St. Bonaventure.

The Bulls rolled through the Mid-American Conference this year and had close losses against several NCAA Tournament teams, including Cincinnati, South Dakota State, St. Bonaventure and Syracuse. Buffalo made the Big Dance in 2015 and 2016, playing West Virginia and Miami tough before falling in both games. This could be the year the Bulls finally break through, though first-round opponent Arizona is a difficult one.

DON'T FORGET: Marshall. The Thundering Herd are in the NCAAs for the first time since 1987 and have some momentum after winning the Conference USA Tournament .

Bucknell, which won the Patriot League , had one of the biggest upsets in NCAA Tournament history when it knocked off Kansas as a No. 14 seed in 2005. The Bison also beat Arkansas in the 2006 tournament and last year as a No. 13 seed played West Virginia tough.

DON'T FORGET: Stephen F. Austin. The Lumberjacks knocked off West Virginia in 2016 as a No. 14 seed and then gave Notre Dame a terrific game before falling 76-75.

Georgia State isn't a regular in the tournament, but the Panthers have made the most of their opportunities in the past. They beat Wisconsin in 2001 as a No. 11 seed and shocked Baylor 57-56 in 2015 as a No. 14 seed. The Panthers won the Sun Belt Tournament.

Is this the year a No. 16 seed finally beats a No. 1? Probably not, but the Ivy League champion Quakers might have a fighting chance. They haven't won a game in the NCAA Tournament since beating Nebraska in 1994, but they have a history of competitive losses in the Big Dance and even made a Final Four back in 1979. The Ivy League is also responsible for one of the biggest 16-1 scares of all-time, when Georgetown narrowly beat Princeton 50-49 in 1989.