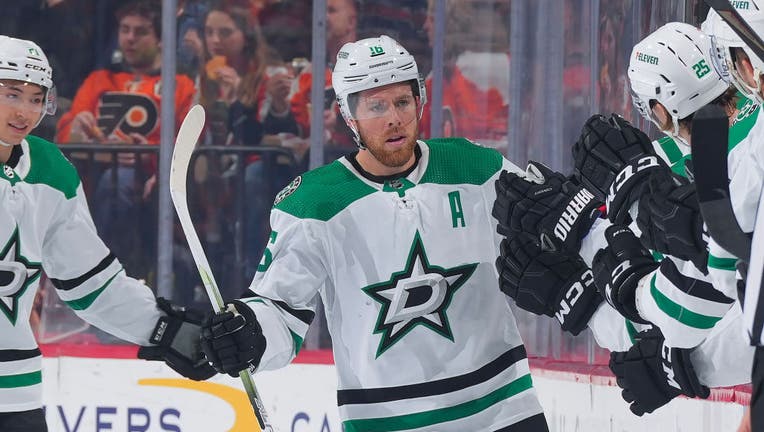 PHILADELPHIA, PA - NOVEMBER 13: Joe Pavelski #16 of the Dallas Stars celebrates with teammates on the bench after scoring a goal against the Philadelphia Flyers in the second period at the Wells Fargo Center on November 13, 2022 in Philadelphia, Penn

PHILADELPHIA (AP) - Joe Pavelski scored a goal and added two assists and Jake Oettinger recorded 37 saves to lead the Dallas Stars to a 5-1 win over the Philadelphia Flyers on Sunday.

Matej Blumel, Esa Lindel, Luke Glendening and Jason Robertson all scored for Dallas, which snapped a two-game losing streak in the first game of a three-game Eastern Conference road swing.

Travis Konecny recorded his sixth goal of the season for Philadelphia, which lost its third game in a row and fifth in its last seven contests. Felix Sandstrom had 26 saves for the Flyers.

Despite playing his entire 17-year career in the Western Conference with San Jose and Dallas, Pavelski has thrived against Philadelphia -- 23 points (15 goals, eight assists) in just 22 career games.

After assisting on Blumel's first career goal early in the first, Pavelski added a power-play tally midway through the third when he tipped a point shot from Miro Heiskanen just under Sandstrom's pad to make it 3-1 for his eighth goal of the season.

He would later poke a pass to Robertson midway through the third that the veteran would slide past Sandstrom for the game's final scoring play. Lindell had two assists to go along with his first-period goal.

Oettinger entered play Sunday with an NHL-best 1.91 goals against average.

He had missed four games due to a lower-body injury earlier this month, struggled in his return to action Friday in a 5-4 loss at home to San Jose and was tested by Philadelphia's offense in spurts.

But Oettinger didn't yield any deep rebounds or second chances, only the goal from Konecny, who completed a brilliant tic-tac-toe passing clinic from Owen Tippett and Kevin Hayes to the stick side. Oettinger was also instrumental in keeping the Flyers' power play to 0 for 6 on the afternoon.

Flyers: Forward Wade Allison missed Sunday's game after suffering an apparent lower body injury in Saturday's 4-1 loss to Ottawa. Allison has three goals and an assist in 14 games for the Flyers.

Flyers: Begin a three-game trip in Columbus on Tuesday.